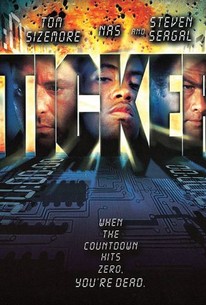 A cop on the edge, Nettles (Tom Sizemore), must team up with the cool-headed leader of the bomb squad, Glass (Steven Seagal), to stop the terrorist Swann (Dennis Hopper) from continuing his series of deadly bombings. Jaime Pressly co-stars as the woman who could finger the mad bomber. Singing stars Chilli (from TLC) and Nas co-star in this action drama.

...you've got all the ingredients for a flick that should have starred Eric Roberts and Ice-T...

There are no featured audience reviews yet. Click the link below to see what others say about Ticker!