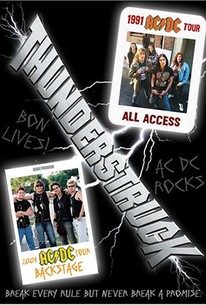 Thunderstruck begins with the death of a boy who shared with his closest friends an affinity for the music of the rock band AC/DC. The survivors pledge to pay tribute to their fallen friend by burying him next to the late lead singer of the band Bon Scott. Over a decade later the survivors reunite to follow through on their commitment, but soon learn that the intervening years have affected them and their relationships. ~ Perry Seibert, Rovi

Saskia Burmeister
as Chloe
View All

Any metalhead or classic rock fanatic will find plenty here to enjoy, even if the on-screen proceedings are rote.

The music is great, the opening compelling and promising, and moments of fun are great. But Thunderstruck is not as thunderstriking as its elements might suggest.

Damn I never thought I?d actually see anyone look hot in Golf Clothing. & Sam Worthington is. Oh yeah also in a long wig looks kinda like axl Rose!! LMAO. About a group of friends who LOVE Ac/DC & while at a concert promise each other that whoever dies (first?) is to be buried next to him. So one of them die first (in a kinda ?freak? accident if you call it that) & go on a road trip to make good on that promise. funny, & it made me think of a few movies at once (not in a bad way) just element wise. I don?t recall any movie I?ve seen having a plot like this. Sam Worthginton w/ Long hair kinda looks like Axl Rose!! Lol) was fun. As well as how ?scary? or far some fan devotion can be. B