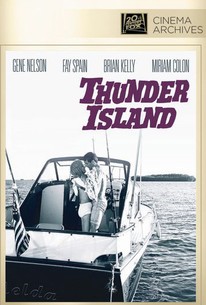 In this drama, a hit man is hired by a group of South American nationalists to kill their exiled ruler in his new Caribbean home. To get there, he hijacks a boat and its two frightened occupants. He keeps the boat-owner's wife as his hostage. When he gets to the island, the assassin misses his mark and suddenly finds himself targeted for death by the deposed dictator's henchmen and by the boat owner. It is the latter who finally kills the hit man and rescues his terrified wife. The story is filmed on location in Puerto Rico.

Axel Anderson
as (uncredited)
View All

There are no critic reviews yet for Thunder Island. Keep checking Rotten Tomatoes for updates!

There are no featured reviews for Thunder Island at this time.