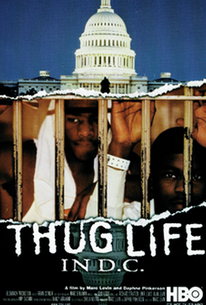 "Our generation died before it was ever born" "I'm talking about the system, the police, homicide, DA, FBI, all of them." - Aundrey Bruno, Thug Life In D.C. "It don't stop till all of us dead. Till the whole District of Columbia go up in gunsmoke..." - Young Thug in D.C. In majority-black Washington D.C., fifty percent of young African-American men between the ages of eighteen and thirty-five are either in jail, in prison or on parole. When an entire generation of young men have been criminalized, how does one break the cycle? Filmmakers Marc Levin and Daphne Pinkerson explore the sad realities of the young black man: the rough inner city neighborhood, no father, poor schooling, lust for materialism, a short career in crime followed by a extremely lengthy sentence in prison. The film focuses on one inmate in particular: Aundrey Burno. Aundrey, who awaits trial for the attempted murder of a police officer and the murder of a teenager, is the definition of a thug through his readiness to do whatever it takes to get respect and protect himself. Through the course of two and a half years, Levin and Pinkerson get behind the stereotypes and statistics to reveal Burno himself, his devastated mother, the cop he shot, the inmates who share his home, a sympathetic warden, the prison gatekeeper, and Kevin, his kid brother, who carries the burden of either joining the cycle or breaking free from its chains. Thug Life in D.C. takes its viewers deep into the criminal justice system and the urban environment that gives its black inhabitants few options in life, little hope, and no reason to care.

There are no featured reviews for Thug Life in D.C. at this time.