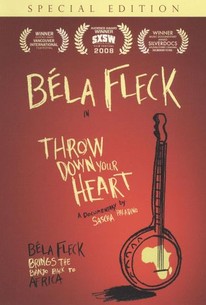 Critics Consensus: Throw Down Your Heart is an exuberant musical journey with an edge of sadness.

Critics Consensus: Throw Down Your Heart is an exuberant musical journey with an edge of sadness.

Critic Consensus: Throw Down Your Heart is an exuberant musical journey with an edge of sadness.

Throw Down Your Heart Photos

Béla Fleck is one of the world's most acclaimed banjo players and a musician who has sought to expand the boundaries of his instrument, having won awards for classical recordings and his many albums with the innovative jazz group Béla Fleck & the Flecktones as well as the bluegrass music most commonly associated with the banjo. The banjo has its origins in Africa, and Fleck traveled to the continent to study the instrument's history and collaborate with native musicians. Filmmaker Sascha Paladino joined Fleck for his journey, and Throw Down Your Heart is a documentary which follows the banjo virtuoso as he travels through Gambia, Mali, Tanzania, and Uganda, meeting with historians and musicologists and making music with artists from all walks of life, ranging from world music stars like Bassekou Kouyate and Oumou Sangare to ordinary people who share the love and joy of making music. Throw Down Your Heart was an official entry at the 2008 South by Southwest Film Festival.

News & Interviews for Throw Down Your Heart

Critics Consensus: Fighting Is Down For The Count

View All Throw Down Your Heart News

Critic Reviews for Throw Down Your Heart

This is an honest journey into discovery that reveals the connection music brings between cultures where commonality is not always easy to find.

Fleck is an ideal protagonist for a film about the adhesive power of music and inadequacy of speech. Even as the plot sags and he grasps clumsily for words, his fingers on the strings are almost momentum enough.

The movie is at least 20 minutes too long. By the time Fleck gets to the final stop, Mali, the film, directed by Sascha Paladino (a half-brother of Fleck), has worn out its welcome.

When Ms. Sangare sings a heartbreaking lament of "a worried songbird" searching for her father, you don't need to know the language to be gripped by the force of her cry.

Fleck comes across as respectfully curious and eagerly collaborative while exploring the roots of his favorite musical instrument.

All the jams are fabulously stirring but not sappy, especially when Fleck duels with a Gambian man on a three-string akonting (forefather to the banjo), but there's nothing more to the film.

As a whole the film often feels more like a PBS special than a theatrical documentary, but it's hard to deny the film's charms.

The stories accent the universality of people without needing to overtly point it out.

Musician Bela Fleck brings the banjo back to Africa, where it originated. Overall, the music is terrific and the film's intentions are good. But less would have been more.

It's a journey long on affecting songs and musical passages, and short on scholarship -- and that works just fine for Fleck's intentions.

As a record of a musical experiment, Sascha Paladino's film is a feast of stirring sounds and sights.

If Fleck weren't such a gracious soul chasing the spirit of Sankofa, this could have been an exercise in exploitation of Graceland-ian proportions. But that's hardly the case on his magical musical mystery tour.

Audience Reviews for Throw Down Your Heart

There are no featured audience reviews yet. Click the link below to see what others say about Throw Down Your Heart!

Throw Down Your Heart Quotes