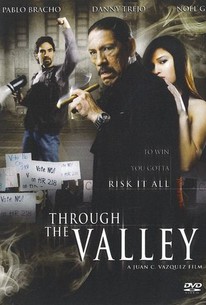 Through the Valley Photos

A reformed criminal who has dedicated his life to helping young kids avoid making the same mistakes that he once did is drawn back into a life of crime and framed for a murder by the local DA. Jaime Flores nearly threw away his entire life on the streets, but these days he's working to prevent the next generation from walking that same self-destructive path. But while Jaime may have left that life behind, his brother is still out there hustling his life away. When Jaime is drawn back to a life of crime by the sibling he once tried to save, he finds himself framed for murder and forced to do battle with a corrupt district attorney who only cares about his conviction rate, and can't be bothered with concepts like guilt or innocence.

Critic Reviews for Through the Valley

There are no critic reviews yet for Through the Valley. Keep checking Rotten Tomatoes for updates!

There are no featured reviews for Through the Valley at this time.

Through the Valley Quotes