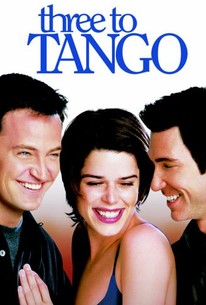 In this romantic comedy of mistaken identity, Oscar Novak (Matthew Perry) and Peter Steinberg (Oliver Platt) are a pair of struggling but talented Chicago architects given the chance of a lifetime: Charles Newman (Dylan McDermott), an extremely wealthy business tycoon, is considering hiring them to design a multi-million dollar cultural center. However, Oscar and Peter aren't the only ones who've been asked to contribute ideas for the project; Decker and Strauss (John C. McGinley and Bob Balaban), two highly successful designers that Oscar and Peter used to work for, have also been approached by Newman, who thinks that a competition between the two teams would be good fun and good press. Oscar is determined to show his dedication to the job, so when Newman asks him to start keeping tabs on his girlfriend Amy (Neve Campbell), he's happy to oblige. Oscar proves a sad excuse for a private eye, and finds himself falling in love with the woman that he's supposed to trail. To complicate matters, Charles gave Oscar the assignment because he was sure that Oscar is gay, and he hasn't been shy about telling people; soon Amy is convinced, along with most of Chicago. And while Oscar doesn't want to upset Newman, he also doesn't want to start living a lie, especially one that would keep him away from the woman he loves. So when Oscar is named Chicago's Gay Professional of the Year, what's a (straight) guy to do? Three to Tango features such familiar TV faces as Matthew Perry from Friends, Neve Campbell from Party of Five, and Dylan McDermott from The Practice.

Shaun Smyth
as Intern No. 1

Robin Brûlé
as Intern No. 2

Brett Heard
as Intern No. 3

Les Porter
as Peter's Friend No. 1

Andrew Dolha
as Peter's Friend No. 2

Ned Vukovic
as Peter's Friend No. 3

Keith Kemps
as Dinner Guest No. 1

Lowell Conrad
as Dinner Guest No. 2

Marni Thompson
as Amy's Girlfriend No. 1

Deborah Pollitt
as Amy's Girlfriend No. 2

Anais Granofsky
as Amy's Girlfriend No. 3

Critic Reviews for Three to Tango

A gay-cliche parade utterly lacking in rhythm, style or drollery.

Inept, unfunny, and so brimming with bad ideas it's a wonder it wasn't manufactured by mandrills rather than adult humans.

Three to Tango trips early and never gets up off the floor.

Three to Tango isn't a waste of time, it's just a middling affair, which would have been better as NBC's 'Romantic Comedy Movie of the Week'.

Although sometimes amusing, 'Three to Tango' relies on a one-joke emphasis that wears thin early on.

Perry and Campbell's natural rapport is put at the service of an idiot plot.

If I had wanted a 90-minute episode of Friends, I would've asked for one.

A whirlwind of bad gay jokes and mistaken motives.

Trouble is, they're trying so hard and missing the mark by so much that they end up being more irritating than appealing.

Full of gay jokes that were tired back in the day of In and Out.

Audience Reviews for Three to Tango

I liked this one and I thought the cast was great. Oliver Platt was awesome in this role and he played off well with the others. It was a simple story but the actors made you care about what was going to happen.

A very funny and like-able rom-com

Matthew Perry does good performance by pretending as a gay man behind his bastard boss and boss' beautiful mistress in this great sexy, funny and irresistable comedy.