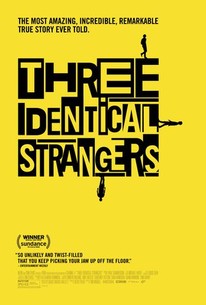 Three strangers are reunited by astonishing coincidence after being born identical triplets, separated at birth, and adopted by three different families. Their jaw-dropping, feel-good story instantly becomes a global sensation complete with fame and celebrity, however, the fairy-tale reunion sets in motion a series of events that unearth an unimaginable secret -- a secret with radical repercussions for us all.

The cliché "stranger than fiction" is probably used a little too freely, but this really is that.

It combines interviews, archive footage and dramatic reconstructions to take us as close in to the story as possible, not coming to any conclusions. You won't be able to look away.

This haunting documentary uncovers as much of the truth as is possible.

It never loses sight of the three scarred subjects at the core of the tale, and of the sense of profound injustice inflicted on blameless children. Unmissable.

Entertaining and stimulating as it generally is, Wardle's film keeps bumping its head on a ceiling, conceptually speaking.

Director Wardle and his team have an astonishing story to tell. They tackle it in relatively conventional and restrained fashion with talking head interviews, one or two dramatic reconstructions and clever use of archive.

In all likelihood, the movie will enrage you; it's the type of emotional response that's difficult to aim in a specific direction, making it all the more frustrating as a morality tale.

Tim Wardle gives us this brilliant bio-doc on the fate of separated-at-birth Jewish boy triplets...

A new addition has joined the already impressive roster of feature-length documentaries this year.

The film has a thesis, which is incredibly refreshing for a documentary. It wraps up both the narrative it constructed, and offers its audience a little nugget of hope...

It's a story that delights and infuriates. It raises questions about justice and ethics, makes cases on both sides of the nature-versus-nurture argument, and draws parallels between what happened to the boys a few short decades ago.

The very engaging and thought-provoking Three Identical Strangers does justice to its extraordinary real-life tale and effortlessly proves that reality sure can be stranger - and perhaps even more disturbing - than fiction.

I honestly don't know why anyone would find this story so amazing and incredible - a story that is actually filled with vague speculation and moralizing about the separation of twin babies - but what I find really unbelievable is how these boys became famous just because of that.

The last three or so minutes of this thing will get you despite it dragging slightly from moment to moment in the last half hour. Utterly, utterly fascinating stuff here that is as much about nature versus nurture as it is context, context, context. To this point, the editing is outstanding. Hesitant to say much more about it as I knew little to nothing walking in and came out completely chilled and rather mystified. Will certainly come back to this again (and probably again & again). Cannot stop thinking about it.

It gets a little too saccharine in some of its conclusions, especially when you consider all the dark turns the narrative takes, but perhaps that is an effort to rebuke the cruelty inflicted on these people. Regardless its a compelling narrative.

GEEZ LOUISE! - My Review of THREE IDENTICAL STRANGERS (3 1/2 Stars) Tim Wardle's documentary, THREE IDENTICAL STRANGERS, isn't the sort of film that sneaks up on you, since it rushes out of the gate with such an entertaining burst of energy. Employing somewhat distracting, soft focus reenactment footage with direct-to-camera talking heads, he tells the story of identical triplets, separated at birth in 1961 and who meet for the first time when they're 19 years old. A random case of mistaken identity on Bobby's first day of college leads him to discover he has a twin brother, Eddy. When their meeting makes the news, David sees himself in the pair, leading to their joyous reunion. Dressing and acting alike, all with infectious, toothy grins and dynamic energy, they find instant fame on the talk show circuit and even make a brief cameo appearance in Madonna's breakout film, DESPERATELY SEEKING SUSAN. This section is enough for a fun, human interest story, but clearly not enough for a movie. Something darker must await the audience. Once the dust settles, questions start to arise. None of their adoptive parents knew their children were born triplets, a fact kept from them by the Louise Wise adoption agency, which primarily helped find homes for Jewish adoptees. When the parents confront the Wise's Board of Directors, something seems a little off. It reminded me of the next door neighbor gatherings in ROSEMARY'S BABY, with Louise Wise and her gang guilty of something despite their warm smiles. It turns chilling, especially in interviews with a peripheral person to the agency who either will make complete sense to you, or you'll be shocked by the banality of her brand of evil. I won't spoil where all this leads, but suffice it to say, this humorous look at how nature can produce seemingly identical people despite the fact that they were raised in completely different ways, turns very sad and very dark. The role of nurture comes into play, especially as the onion layers get peeled off to reveal three distinct personalities. By the end, you're left wondering what shaped each of their lives, what informed their behavior, and how much of it was instinctual versus learned. It's fun tracing the rise of the brothers, who clearly had a thirst for fame. It's a rags, rags, rags to riches, riches, riches and back again story. You feel their flush of love for each other but can see the sadness in their eyes as they tell their stories. It's a deeply unsettling experience to watch. I'm not convinced that Wardle gets as far as he can with his subjects. They seem to hold back a little, perhaps minimizing the terrible downside which befell them after meeting. You wonder if they would have been better off blissfully unaware of their past. All told, THREE IDENTICAL STRANGERS is a terrifying piece of work. It may force you to not trust elation. It opens your eyes to the fact that even the people who appear to do good in the world may not have your best interests in mind. As a world currently filled with a surplus of trust issues, the film plays right into that. It's a killjoy, a good killjoy, but a killjoy just the same.