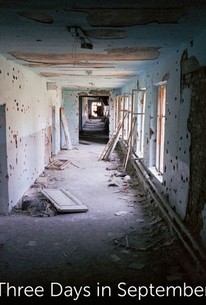 Joe Halderman's documentary Three Days in September chronicles the 2004 incident when terrorists took over a school in Chechnya, holding over 1,000 hostages for three days. The footage, some of it shot by the terrorists themselves using one of the hostage's cameras, shows in clear detail the horrific events the hostages endured. This footage is interspersed with images of loved ones who gathered nearby in order to provide what support they could. Narrated by Julia Roberts, Three Days in September had its world premiere at the 2006 Tribeca Film Festival. ~ Perry Seibert, Rovi

It is a superb and disquieting marvel of television journalism...

There are no featured reviews for Three Days in September at this time.