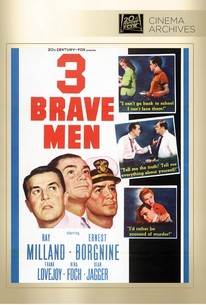 The only thing genuinely brave about Three Brave Men is the second word in the title. The film is based on the true story of a Navy employee who was fired as a security risk, then took the case to court to prove his loyalty to the United States. Ernest Borgnine plays the victimized employee, whose life is ruined simply because he once briefly participated in an alleged "Pinko" organization. Borgnine and his family are ostracized from the community when word leaks out about his so-called disloyalty. Lawyer Ray Milland takes Borgnine's case; he pleads so eloquently on behalf of his client's patriotism that the navy, represented by Eisenhower lookalike Dean Jagger, reinstates Borgnine. The problem in Three Brave Men is in how the material is approached. Instead of attacking the atmosphere of paranoia that fostered the Communist "witch hunts" of the 1950s, the crucifixion of Borgnine is treated as a necessary evil in the interests of "democracy." The low point comes at the end, when Ray Milland profusely thanks the Navy for their open-mindedness before his client has been exonerated.

Carleton Young
as Board Chairman

There are no critic reviews yet for Three Brave Men. Keep checking Rotten Tomatoes for updates!

There are no featured reviews for Three Brave Men at this time.