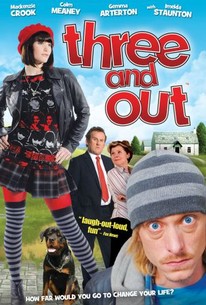 Three and Out Photos

Death gives two men a new lease on life in this dark comedy from the UK. Paul Callow (Mackenzie Crook) makes his living driving a subway train in London, though he'd like nothing more than to be able to quit his job, move to Scotland and devote his time to writing a novel. Paul isn't an especially cheerful guy under the best of circumstances, but he's been on edge since two people slipped off a platform and fell onto the tracks before he could stop his train. A fellow driver tells Paul that the London Underground rail system has a secret policy called "three and out," in which if a driver is responsible for three fatalities within a month, they'll be let go with a golden handshake equal to a decade's salary. Shocked but sensing an opportunity, Paul looks for someone wanting to kill themselves, and finds Tommy Cassidy (Colm Meaney), who Paul prevents from jumping off a bridge in a suicide attempt. Paul makes Tommy an offer -- if he'll throw himself under Paul's train, Paul will give him enough money to enjoy one last night on the town and still have enough to leave a nest egg for his family. Tommy agrees, and Paul takes him to Liverpool for a wild weekend, where they revel in the joys of petty crime and Paul attempts to romance Tommy's teenage daughter Frankie (Gemma Arterton) and his former wife Rosemary (Imelda Staunton). But what if Tommy enjoys himself enough that he doesn't feel like dying at Paul's behest on Monday? ~ Mark Deming, Rovi

News & Interviews for Three and Out

RT Interview: Colm Meaney on Three and Out, Life on Mars and life after Trek
Exclusive: RT Visits the Set of Three and Out

View All Three and Out News

Critic Reviews for Three and Out

The mystery is why some of Britain's finest character actors including Crook, Meaney, Antony Sher and Imelda Staunton got caught up in this mess.

Rare winning moments aside, Three and Out is unconvincing, uneven and unfunny: a severe points failure.

Too gauche, too derivative and merely sporadically amusing.

There's no light at the end of the tunnel in this misguided romp whose solitary redeeming feature is its quality cast.

Ostensibly a black comedy, this Brit road movie engages most in its more reflective moments, focusing on characters' feelings of guilt, anger, sadness and regret.

Audience Reviews for Three and Out

Decent comedy drama with Mackenzie Crook as a man who, already bored with his job as a London tube driver, becomes even more depressed when two people throw themselves under his train in as many weeks. But later our man finds out if he hits three people iin a month he gets early retirement and 10 years salary. Spurred on by this he attempts to find a third victim/accident so he can finish his job, claim the ten years salary and move to his dream house, in the middle of nowhere in Scotland, and get on with his dream job as a writer. This is a well written, effective comedy drama with good performances from Crook, Colm Meaney, Imelda Staunton and the lovely Gemman Arterton.

Three and Out Quotes