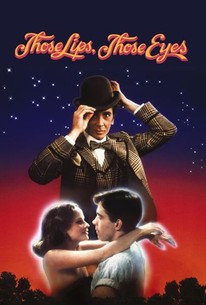 Obviously a labor of love for all concerned, Those Lips, Those Eyes is set in the 1950s. Pre-med student Thomas Hulce takes a job as a prop boy at an Ohio summer-stock theatre. His ineptitude nearly costs him his job, but Hulce is protected by Frank Langella, the troupe's leading man. Langella's character is instantly recognizable to anyone who's ever worked in community or summer theatre: possessed of more charm than talent, he is a "star" only so long as he remains a big fish in a small pond. While any other film might turn this character into a loser or villain, Langella emerges as the most likeable person in Those Lips, Those Eyes, especially when he orchestrates a romance between Hulce and chorus dancer Glynnis O'Connor. Almost as good as Langella, though not quite as lovable, is Jerry Stiller as Hulce's abrasive father.

Susan Berlin
as The Redhead

Critic Reviews for Those Lips, Those Eyes

Since the movie's center is wrong, not much of anything works.

There are no featured reviews for Those Lips, Those Eyes at this time.

Those Lips, Those Eyes Quotes