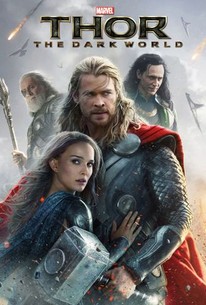 Critics Consensus: It may not be the finest film to come from the Marvel Universe, but Thor: The Dark World still offers plenty of the humor and high-stakes action that fans have come to expect.

Critics Consensus: It may not be the finest film to come from the Marvel Universe, but Thor: The Dark World still offers plenty of the humor and high-stakes action that fans have come to expect.

Critic Consensus: It may not be the finest film to come from the Marvel Universe, but Thor: The Dark World still offers plenty of the humor and high-stakes action that fans have come to expect.

Marvel's "Thor: The Dark World" continues the big-screen adventures of Thor, the Mighty Avenger, as he battles to save Earth and all the Nine Realms from a shadowy enemy that predates the universe itself. In the aftermath of Marvel's "Thor" and "Marvel's The Avengers," Thor fights to restore order across the cosmos...but an ancient race led by the vengeful Malekith returns to plunge the universe back into darkness. Faced with an enemy that even Odin and Asgard cannot withstand, Thor must embark on his most perilous and personal journey yet, one that will reunite him with Jane Foster and force him to sacrifice everything to save us all. (c) Disney

Adewale Akinnuoye-Agbaje
as Algrim the Strong/Kurse

Annabel Norbury
as Woman on Platform

Stan Lee
as Himself

Steve Scott
as Himself

When Marvel brought in Alan Taylor, the director of Game of Thrones, to invigorate the Thor franchise, many hoped for a breast-bearing, dwarf-battling, blood-spurting melodrama -- with capes and hammers. Sadly, it was not to be.

Comic-book superheroes have become so angst-ridden in recent years it's a relief to be around one who has hung on to his sense of humour.

Thor: The Dark World is a good model of how superheroes can save the world without forced gravitas, and have fun doing it.

Enough with the appetite-whetting experiments. Just wake me when The Avengers: Age of Ultron is here.

A wildly uneven but entertaining sequel to one of Marvel Comics' most enduring franchises.

The biggest problem with the movie is that it's boring.

...when it's all said and done, Thor: The Dark World deserves its reputation as the worst MCU movie.

Its various subplots are connected not by theme or by character, but by coincidence. It has the appearance of well-structured drama, but it leaves too many elements hanging in mid-air to form a coherent whole.

Regardless of the numerous plot twists, there are brilliant jokes and great fights, Thor: The Dark World is a fitting sequel for post-Avengers action.

Overall, the script may be sloppy and the tone may fluctuate but darn if Thor: The Dark World ain't the fantasy/sci-fi, slapstick, action-packed, bizarre romp you never knew you kinda wanted.

Solid title, lets hope it really is dark...yeah right. Its only been two years and we have another Thor adventure. The first film wasn't too bad considering the source material is a tough cookie to film, so I went into this sequel with a relatively positive outlook. So far Marvel has done us proud so why worry. Oh dear, now I would mention the plot outline briefly, as normal, but put simply...I can't. The reason being I genuinely don't really understand what I just saw. I haven't been this confused in a film since I don't know. The bad guys in this film are called Dark Elves which sounds pretty sweet admittedly...and kinda 'Warhammer-ish'. They all look quite cool with their creepy gaunt expression-less masks on and their leader Malekith also looks really good and evil...and kinda 'Hellboy 2-ish'. You could also say they all feel a tad like Stormtroopers especially with all the lasers being fired everywhere, was that laser fire? Looked like it. The Star Wars similarities became even worse when the elves started attacking Asgard in rather familiar looking spacecraft. Asgard itself also looking suspiciously like the capital city of Naboo, Theed. So even though these Dark Elves look quite cool they simply end up as masses of faceless hammer fodder for Thor and his buddies. There is also an uber Dark Elf monster thing that Malekith created with some of the Aether? Again visually great with a nice body suit but why didn't Malekith just do this with all his elves or as many as possible? Oh and one minute he's with Malekith after being changed/infected, and the next scene he's captured and in Asgard?! Wut?! The script is a complete mess, the film jumps around just like the characters do in the final half of the film. What exactly do the Dark Elves want?? They just wanna errr...destroy the universe? Shroud it in darkness?...why exactly? At the start when Portman is sucked into another dimension or something I had no clue what was going on or why she was sucked in. Then there's this Aether stuff...what the hell is that suppose to be? Is it a living being? What's its purpose? Where does it come from? Did anyone make it? Damn unlucky how Portman's character got zapped straight to where this lethal universe destroying stuff was though huh, wow what are the odds! The action is generic and boring throughout, sorry but it is. The escape from Asgard is typically absurd as Thor manages to pilot a craft he's never stepped foot in before. OK that aspect is joked on by Loki but he still manages to pilot it skillfully evading lots of laser fire and treacherous tight spaces. None of the elves pose any threat to Thor or his mates whatsoever, including a big stone creature. This could quite easily be a lightweight 'Lord of the Rings' spin off frankly, replace elves with orcs, they're both useless against good guys. Most of the fights are pointless as Thor's mates are all invincible yet at the same time Asgardian soldiers seem to be just as useless as the bad guys. You can tell things weren't going as well as hoped because they have stuck Loki back into the fray to try and boost the film. Easily the best character for sure but Jesus Christ you can't rely on this guy every time, I'm amazed the characters are still dumb enough to even trust him sheesh! They actually closed the book with Loki really well in this film but nooooo...couldn't leave it at that, had to have that last twist to spoil it. Continuity wise the film is great no doubt, everyone is back and the story follows on well from the first film. I hope this is the last we see of Portman though as I simply cannot stand her, she has a small range of facial expressions and she uses them over and over. Plus she looked really bored here. Bad guy Eccleston (Hollywood loves a Brit bad guy don't they) had nothing to do and very little to say, great makeup but wasted badly. Sure the film looks delicious with lovely CGI but did you expect it not to? Well I say that but everything falls apart in the London finale, yep the end of the world happens in...Greenwich. The last long long action sequence is the biggest flapping muddle ever, there are characters jumping and falling through portals like no ones business. Weapons and debris flying all over the place and popping up here there and everywhere, the elves look like tacky extras from Doctor Who as they run around the London streets, its all ridiculous. The entire plot is utterly preposterous, it makes no sense half the time and the other half is virtually unexplained. It all hinges on this Aether stuff and the alignment of the nine worlds...annnd as I type this I'm boring myself. This whole film just feels like filler until the next Avengers outing, nothing more. The action is tepid and bland, half the characters didn't even need to be here as they have little screen time, the Earth based human characters were annoying, the plot is something else and the end of credits scene with Del Toro looked absolutely awful!! Sorely disappointed with this generic effort.

For my money Thor is the best of the Marvel line up, the only question is will they do right by him? In this one they come close. There's action, humor, pathos, and all played with conviction. Hopkins role could be enlarged some, and the bad guy threat could use some definition but other than that ...

Notably superior to the first movie and a decent follow-up to The Avengers, this entertaining film has a consistent plot, plenty of humor, an always charismatic Chris Hemsworth and also Tom Hiddleston stealing every scene he appears in as the deceitful god Loki.

It makes 0 sense. Logic has left the building. But, Thor: The Dark World is mindlessly entertaining. I had a ridiculous amount of fun. Also, Hiddleston's Loki steals every scene he is in. This was also probably the funniest Marvel movie I have ever seen.