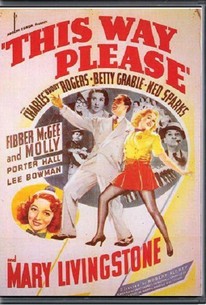 This Way Please marked Betty Grable's first appearance under her new Paramount contract. The fact that Grable plays the new bride of Charles "Buddy" Rogers takes on special significance when one realizes that Betty was two months away from her first marriage, to former child star Jackie Coogan. The plot is set in a first-run movie theatre that offers stage presentations along with the main feature. Brad Morgan (Rogers) is the theater's master of ceremonies, while Jane Morrow (Grable) is chief usherette. She'd rather be on stage dancing with Brad, and by film's end she gets her wish -- but not before a riotous slapstick wedding sequence. Jim and Marian Jordan, radio's Fibber McGee and Molly, make their film debut, as does Jack Benny's radio foil (and real-life wife) Mary Livingstone, here appearing on-screen without her husband for the first and last time in her career. The film is stolen by Rufe Davis, the "human sound effects machine," doing a medley of his specialty.

Critic Reviews for This Way Please

This was Betty Grable's first appearance under her new Paramount contract.

There are no featured reviews for This Way Please at this time.