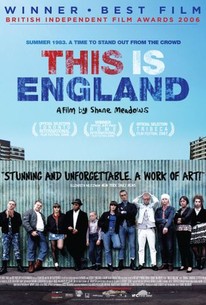 Critics Consensus: A moving coming-of-age tale that captures the despair among England's working-class youth in the 1980s.

Critics Consensus: A moving coming-of-age tale that captures the despair among England's working-class youth in the 1980s.

Critic Consensus: A moving coming-of-age tale that captures the despair among England's working-class youth in the 1980s.

This Is England Photos

It's 1983 and school is out. Twelve-year-old Shaun is a lonely boy growing up in a grim coastal town in northern England, whose father died fighting in the Falklands War. Over the course of the summer holiday he befriends a group of local skinheads. With his pent-up rage and frustration, Shaun finds exactly what he needs in the gang-mischief, mayhem and brotherhood. He also meets the volatile and boorish Combo, an older skinhead who sees himself in Shaun. Adopting Shaun as his protege, Combo leads the gang down a hate spewing path that culminates in an irreversible act of violence.

News & Interviews for This Is England

View All This Is England News

Critic Reviews for This Is England

How sad and predictable is the fate of those who counsel violence as a means to an end. And yet how poignant it all seems when viewed through Shane Meadows' thoughtful lens.

You wouldn't think a film about a group of British skinheads during the early 1980s could be a sweet, nostalgic coming-of-age period piece, but that's the surprise of the authentic, fresh and utterly relevant This Is England.

Its tough but moving neo-realist approach make it one of the better British films of recent times.

It may be the best work to date from the talented 34-year-old writer-director of Twenty Four Seven (1997).

A drama that's so potent and persuasive yet also natural and intimate that it almost has the heft of a documentary.

A movie about the allure of groupthink and how the warm comfort of being surrounded by peers wilts all sense of balance.

Meadows captures the violent clash of subcultures in England through the eyes of a lost and lonely young boy.

Nevertheless a must-see for Smiths' devotees willing to be deprived of just about everything Smiths.

It is the war within him--and by extension, within the minds of many embittered, working class young men left behind in Thatcher's England--that Meadows's film most strikingly portrays.

Steeped in the raw mix of ska and punk sound as expression of the youth alienation and misguided rage of those tumultuous times, an alarming voice of the surging army of jobless youth back then dubbed 'no hopers.'

Audience Reviews for This Is England

Touching, funny, harrowing; "This is England" is a film of effortless power and a definite standout of British movie making in the noughties. An honest, street-smart screenplay (and autobiographical account) by Shane Meadows (Dead Man's Shoes) and the incredible performances of the young Thomas Turgoose and Stephen Graham (as one of the scariest ticking time bombs in recent memory) make for an unforgettable film and a mandatory viewing for anyone who appreciates gritty realism on screen.

It's a very interesting movie and I can understand why some people would call it a masterpiece. I however thought it was good but at times a bit too gritty for it's own good. Unlike say, Four Lions, it didn't sympathise the characters enough and sometimes when the drama get's too serious, it get's a bit boring. This is England is a skillfully directed film and the source material has been studied in depth but a lot of people I guarantee will loathe it.

A bit underwhelming, perhaps due to the big hype. Seemed like some good improvisatory acting but not much else. Obviously, the skins do have some of the best music which helps any film. Toots rules.

This Is England Quotes