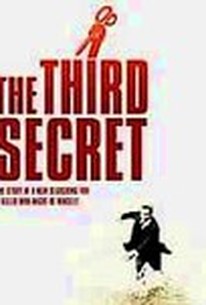 TV commentator Stephen Boyd doesn't believe the official verdict of suicide in the death of a famed London psychiatrist. Boyd tries to get to the truth by studying a list of the shrink's patients. While interviewing three of these worthies (Jack Hawkins, Diane Cilento and Richard Attenborough), Boyd discover that each has a deep dark secret that the psychiatrist was privy to. The best-kept secret concerns the schizophrenia of the dead man's teenaged daughter (Pamela Franklin)--a fact that provides the key to mystery. The Third Secret originally featured Patricia Neal as one of the suspects, but her scenes were cut from the final release print. ~ Hal Erickson, Rovi

Critic Reviews for The Third Secret

There are no critic reviews yet for The Third Secret. Keep checking Rotten Tomatoes for updates!

Audience Reviews for The Third Secret

There are no featured audience reviews yet. Click the link below to see what others say about The Third Secret!