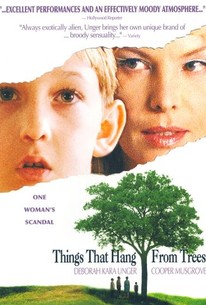 Things That Hang From Trees Photos

Things that Hang from Trees constitutes American director Ido Mizrahy's debut feature. As adapted by singer-songwriter Aaron Louis Tordini from his own novella, this defiantly eccentric drama unfolds on a surreal, southern gothic landscape. Eight-year-old Tommy, incorrectly read as mentally-impaired by many of the local townspeople, lives alone with his skanky mother (Deborah Kara Unger), a sex shop owner. This emotionally troubled child also struggles with painful memories of his abusive, estranged father (Ray McKinnon) - whose mistreatment he recreates in a self-flagellating manner by systematically subjecting himself to the sadism of the local bully (Ryan Parker). While the town barber (Daniel von Bargen) - a psychotic religious nut - obsesses over Tommy's mother, Tommy fantasizes about watching the town fireworks from atop the local lighthouse. The boy finally realizes this dream, but when he descends, he happens upon a shocking discovery that changes his world forever by bringing a permanent end to his childhood innocence.

Critic Reviews for Things That Hang From Trees

A half-baked piece of Southern Gothic, Ido Mizrahy's debut film wears its influences a little too closely on its sleeve.

The causality here is somewhat thin -- any time one story really gets cooking, we're jettisoned to another -- but the ensemble cast does good work, and the location becomes a character unto itself.

Offers a slice of special education-tinged Southern Gothic minus the evocative eccentricity.

Audience Reviews for Things That Hang From Trees

I decided to give this film a chance, because it really is an intriguing story. Set in 1969, in a small town in Florida. An alcoholic father has abandoned his wife and child. The child is slow and has all kinds of problems, so the mother is forced to open up a business. In 1969 what kind of business does every small southern town need? You guessed it, a sex shop! It's a different plot and seemed like it would be a very interesting story, but looks can be deceiving. They hire writers to make the "official" description of the movie, so it sound great and you'll go see it, and in this case they got me. This has got to be one of the slowest and most pointless movies I have ever seen. Everyone is portrayed as stupid, the film is choppy and makes no sense, and on top of that it's just a total bore! They fooled me, don't let them fool you! Avoid this one!

Things That Hang From Trees Quotes