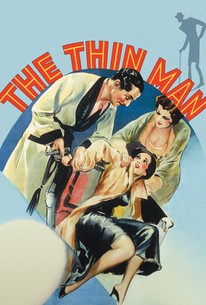 Critics Consensus: Featuring an involving mystery and sparkling repartee between William Powell and Myrna Loy, The Thin Man is an endlessly charming romp.

Critics Consensus: Featuring an involving mystery and sparkling repartee between William Powell and Myrna Loy, The Thin Man is an endlessly charming romp.

Critic Consensus: Featuring an involving mystery and sparkling repartee between William Powell and Myrna Loy, The Thin Man is an endlessly charming romp.

In this film, Edward Ellis plays a mean-spirited inventor. The recently-divorced Ellis discovers that his new girlfriend has stolen $50,000 and is carrying on with other men. Not long afterward, he disappears. Anxious to locate her father, Ellis' daughter Maureen O'Sullivan goes to private detective Nick Charles for help.

Pat Flaherty
as Cop/Fighter
View All

News & Interviews for The Thin Man

View All The Thin Man News

Critic Reviews for The Thin Man

Don't spare the enthusiasm on this one because if the book had thousands of readers, this picture will have millions of customers - well satisfied and with that well-fed look.

One of the most popular comedies ever made.

What enchants, really, is the relationship between Nick and Nora as they live an eternal cocktail hour, bewailing hangovers that only another little drink will cure, in a marvellous blend of marital familiarity and constant courtship.

An excellent combination of comedy and excitement.

The Thin Man was one of the most popular films of 1934, inspired five sequels, and was nominated for four Oscars (best picture, actor, direction and screenplay). Yet it was made as an inexpensive B-picture.

Powell and Loy were one of the greatest screen couples, their cinematic compatibility epitomized here with this second collaboration.

This classic clicks on all cylinders.

[Hammett's] book has been adapted to the screen with an intelligent respect for the original spirit and tempo. The dialogue is bright and sophisticated; and Miss Loy and William Powell carry the thing off with a light touch and a great deal of gaiety.

The Thin Man is just about as good a mystery story as anyone could ask for. That is to say, it keeps you happily amused all the time it is keeping you anxiously waiting.

Tense and slick, this early thriller remains a true masterpiece.

Truly, a film in which there is never a dull moment.

Audience Reviews for The Thin Man

Very witty, very urbane, very smart...very movie magic. An ex-private detective is dragged into a murder case involving the daughter of a friend. It all ends with the classic "all the suspects in the same room while the detective calls out the murderer" staple of detective movies, nonetheless, it's always been about how we get there and how that particular scene is handled. This one is light on it's feet and funny, nearly a primer on how such should be done. And at the center, the whimsical family relationship of the leads and their scene-stealing dog.

A husband/wife detective tandem work to solve a series of murders. The thirties style of slap-dash, madcap overlapping dialogue highlights the excellent performances of this very strong film. Comparing this film to the mysteries of today proves how much harder screenwriters of the old days had to work and how much more language was valued. Every line of this film is so witty and sharp, and William Powell and Myrna Loy never seem like people you know, but they always seem like people you wish you knew. The mystery, originally penned by Dashiell Hammett, is not terribly predictable, but it's solvable, which is the way mysteries should be. Overall, I enjoyed this film immensely, and it made me long to hear more dialogue from this era.

Glorious, Joyous dinner date with murder and laughter hand in hand. Powell and Loy are one charming couple.

Some friends gave me the complete Thin Man series for Christmas, and I have to say after several viewings of all six that the pairing of William Powell and Myrna Loy is one of those matches made in Hollywood Heaven. There are few teams that leap to mind as being better suited to each other; their screen energy is a beautiful phenomenon to behold. Powell is already on my very select all-time favorite actors list, and I'm thinking that Loy is going up there right after I finish writing these comments.

What I find most interesting about the critical comments is not that almost everyone agrees that Powell and Loy are great, but that the series is short on story, flimsy of narrative, lacking in substance -- and one critic goes to far as to say that each successive film is weaker than the one before.

Sorry, I have to disagree. I think the stories are interesting, cleverly conceived, and well written. They are so smartly written, in fact, that the writers have managed to let the plot play in the background so that we can all concentrate on the chemistry of Powell and Loy. Seriously, if I were looking for great literature, I'd turn to the book shelf and dig around for Shakespeare or something, but just like the live audience members back when this series played the theaters, I'm here to see Powell, Loy -- and Asta -- make their magic. And I definitely think that the last one, Song of the Thin Man, is just as magical as the first : )