A Thin Line Between Love and Hate1996 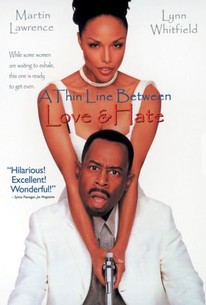 A Thin Line Between Love and Hate Photos

Writer-director Martin Lawrence billed this comic drama as his own version of the film Fatal Attraction (1987). Lawrence stars as Darnell, a hopeless male chauvinist. Darnell is a crude-but-smooth talker and lady's man who doesn't take no for an answer. He works for a nightclub called Chocolate City and aspires to be its owner. He trades VIP privileges at the club for favors from women. Though he is an expert at conning women, he sometimes worries about what his childhood sweetheart Mia (Regina King), who is engaged to marry him, thinks of his adventures. When the classy, elegant Brandi (Lynn Whitfield) steps out of a limousine to enter the club, Darnell feels that he's met his ultimate prize. She rejects his come-ons, which only fuels his appetite. He pursues her, showing up with flowers at her real estate office. He finally wins over Brandi, but she becomes obsessed with him, even taking all four wheels off his sports car to ground him from his rounds. Cutting off his engagement to Mia is not enough to satisfy Brandi, who finally administers Darnell's punishment for his misogyny. ~ Michael Betzold, Rovi

Miguel A. Núñez Jr.
as Reggie

Tom Stillman
as Officer No. 1

Arkay Stevens
as Officer No. 2

Critic Reviews for A Thin Line Between Love and Hate

Sluggishly paced and too seldom funny...

The script lacks wit and depth, while Lawrence's direction is meandering and undramatic, full of showy, over-elaborate camera movements.

Too serious to be a comedy, too flippant to be a thriller, it often feels like a backhanded act of penance for the misogynist humor in the star's comedy act.

[Lawrence is] a charming, gifted comic with a killer smile, but he's way out of his depth in this Fatal Attraction knockoff, which he also co-wrote and stars in.

A Thin Line Between Love and Hate takes its name from the Persuaders 1971 hit that has been re-recorded by the Pretenders, Annie Lennox and H-Town. You could have just as much fun simply playing one of them and skipping the movie.

The screenplay is credited to four writers, and its unevenness argues that none of them were on the same wavelength.

A thin line? Not in this case.

Tiresome stuff, bearable only if you can overlook the questionable premise and find something to like in Lawrence's Eddie Murphy-lite turn.

A ponderous vanity project that is unfunny and, worst of all, just plain boring.

In showing the importance of monogamy, the film is profound enough that it could lead couples to reevaluate themselves; women will look at their new men a bit more quizzically, and men will be less likely to say "I love you" unless they mean it.

Any movie with a bar called Chocolate City can't be all bad, right?

[Lawrence] doesn't seem to know that his protagonist is a deceptive, frivolous, fast-talking and surprisingly stupid womanizer.

Audience Reviews for A Thin Line Between Love and Hate

The 'nrother' element normally gets on my nerves but this was great.

i used to love this one but after the third viewing it didnt hold up, still decent

A Thin Line Between Love and Hate Quotes