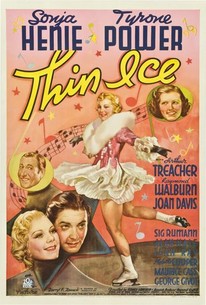 Norwegian skating star Sonja Henie reached an early pinnacle with this romantic comedy co-starring Tyrone Power as a Ruritanian prince impersonating an American reporter. They fall in love, of course, and the whirlwind romance threatens to interrupt an important treaty between three rival principalities. In between Henie's skating extravaganzas -- which reportedly involved more that 100 skaters and a rink 100 by 145 feet in length -- vocalist Leah Ray and the company perform "My Secret Love Affair," "Over Night," and "My Swiss Hilly Billy," all by Lew Pollack and Sidney D. Mitchell, while comedienne Joan Davis takes care of "I'm Olga From the Volga" by Mack Gordon and Harry Revel. Both Thin Ice and Paramount's simultaneous (and better) Easy Living were partially based on a 1922 Hungarian play, +Der Komet, leading Fox to briefly entertain the idea of suing the rival company.

There are no critic reviews yet for Thin Ice. Keep checking Rotten Tomatoes for updates!

There are no featured reviews for Thin Ice at this time.