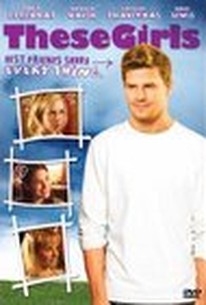 Three young women decide to deal with a shortage of eligible men by sharing an older man in this independent comedy drama. Glory (Amanda Walsh), Lisa (Holly Lewis), and Keira (Caroline Dhavernas) are three friends who've grown up together in a small town in the Eastern Canadian province of New Brunswick. The three teenagers are stuck in a community with few challenges and fewer prospects; growing marijuana is the leading growth industry, and Keira is the only one who is planning to attend college after their imminent graduation from high school. Most of the boys their age are aimless heshers with little going for them, so Keira and Lisa are quite intrigued when they discover Glory has a secret -- she's been having an affair with Keith (David Boreanaz), a local pot farmer and tough guy who is ruggedly handsome and nearly ten years her senior. Despite Lisa's frequently stated religious convictions and the fact Keira ought to know better, the two girls decide that Glory has too good a boyfriend to keep to herself, and they decide to seduce Keith and share him over the course of the summer. Keith is more than wary of this prospect at first, but Keira and Lisa are not about to take no for an answer, and soon Keith is sexually backed into a corner and dealing with more than more than he knows how to handle. These Girls was screened in competition at the 2005 Toronto Film Festival. ~ Mark Deming, Rovi

Critic Reviews for These Girls

Skillful, tight editing reveals the volatile patterns of behavior, shifting suddenly from fights to confessions, dancing to despair, yet in the end the girls are always fiercely supportive of each other.

A rousing documentary on the street children of Cairo, These Girls is an agonizing and uplifting depiction of street survival at its most daunting.

Can a yarn without credibility, can a comedy without laughs, can characters without a centre, can direction without discernment, add up to a movie?

Fun precisely because it allows its characters to have theirs.

This summer-fling comedy turns out to be as generic as its title suggests.

You can't make a movie about the Boogey Man without showing him at least once.

Director John Hazlett imbues the film with all the style of a movie-of-the-week, something that's reflected in the routine, predictable storyline.

It has similar observational humour toward young life as past Canadian productions My American Cousin and New Waterford Girl.

What could have been a rather nasty dark comedy is a wildly funny satire on the art of seduction.

Audience Reviews for These Girls