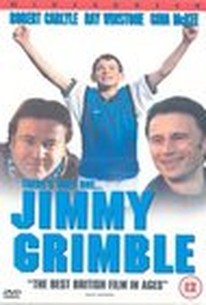 There's Only One Jimmy Grimble Photos

A boy who dreams of becoming a British soccer star discovers his dreams might not be as far-fetched as they seem in this comedy-drama. Jimmy Grimble (Lewis McKenzie) is a 15-year-old misfit living in Manchester, where nothing seems to go his way. Jimmy is constantly threatened by the school bully, "Gorgeous" Gordon (Bobby Power); he's also not sure what to make of Johnny (Ben Miller), a lost-in-the-ozone biker who is dating Donna (Gina McKee), Jimmy's mom; and he has a crush on one of his classmates, Sara (Samia Ghadie), who seems to like him, but his powers of speech invariably fail him when he tries to talk with her. Like most Mancunians, Jimmy loves football, but instead of rooting for world champions Manchester United, he's a fervent supporter of the Manchester City team. Jimmy also loves to play football, but while Eric (Robert Carlyle), the coach of his school's team, thinks he has potential, "Gorgeous" is already a skilled player, and when Gordon's father informs the school he'll make a large and much-needed donation if their team makes it to the Manchester Schools Cup games, it looks like Jimmy will be riding the bench for a while. But when an old woman gives Jimmy a pair of shoes that once belonged to one of Manchester City's greatest players, his skills on the field begin to change. There's Only One Jimmy Grimble also features Ray Winstone, Jane Lapotaire, and John Henshaw. ~ Mark Deming, Rovi

Critic Reviews for There's Only One Jimmy Grimble

Audience Reviews for There's Only One Jimmy Grimble

There are no featured audience reviews yet. Click the link below to see what others say about There's Only One Jimmy Grimble!

There's Only One Jimmy Grimble Quotes