The Theory of Flight1998 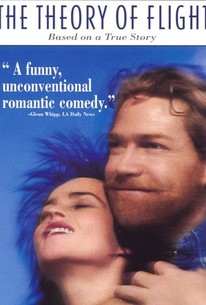 The Theory of Flight Photos

Continuing cinema's fascination with bringing the stories of handicaps and the mentally challenged to the big screen (Rain Man, My Left Foot, Shine, etc.), here comes a low-budget film about the unlikely love story of people brought together by fate, as well as 120 hours of community service. As a frustrated artist who can't build himself a flying machine, Richard (Kenneth Branagh) eventually finds himself in trouble with the law. As punishment for his eccentric behavior, he accepts community service in the company of Jane (Helena Bonham Carter), a strong-willed woman suffering from the neuromuscular disorder called ALS (otherwise known as Lou Gehrig's disease). As the two learn from each other, Jane turns to Richard with the biggest favor of all, helping her lose her virginity. What ensues is a romance/friendship that changes their lives forever.

News & Interviews for The Theory of Flight

View All The Theory of Flight News

Critic Reviews for The Theory of Flight

Unprincipled in its naked contrivance.

The Theory of Flight is actually fairly enjoyable. [But] when you see Dance Me to My Song, you're struck by the difference. Two movies. Same story. Same objective. Similar characters. Similar situation. One is an entertainment. The other is a thunderbolt.

The final reel of the film is over-sentimental, but the early scenes involving the couple at war are affecting.

Kenneth Branagh and Helena Bonham Carter generate enough good will to keep aloft a charming bit of whimsy that probably would crash and burn with lesser talents at the controls.

The cinematic equivalent to experimental light aircraft, this is a bumpy ride that sputters and fails, not quite crashing yet never soaring above its earnest intentions.

Carter's bravura performance is the reason to see The Theory of Flight, but it's a shame that nothing else in the film matches the obvious care she put into her role.

It's one thing to be offbeat and unconventional and quite another to be unbelievable.

Audience Reviews for The Theory of Flight

The Theory of Flight Quotes