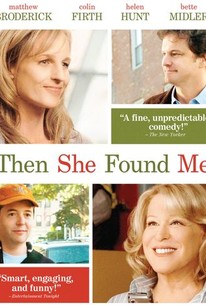 Critics Consensus: A threadbare story anchored by strong performances, Then She Found Me is a mostly successful directorial debut by Helen Hunt.

Critics Consensus: A threadbare story anchored by strong performances, Then She Found Me is a mostly successful directorial debut by Helen Hunt.

Critic Consensus: A threadbare story anchored by strong performances, Then She Found Me is a mostly successful directorial debut by Helen Hunt.

Then She Found Me Photos

Following the separation from her husband and the death of her adopted mother, schoolteacher April Epner is contacted by her apparent birth mother, who turns out to be a local talk show host Bernice Graves. As Bernice tries to become the mother to April that she was never able to be, April seems to find solace in the arms of the parent of one of her students (Colin Firth), only to find that the mystery to life's questions cannot be solved by a simple revelation.

Geneva Carr
as Woman in Her 20s

Maryann Urbano
as Woman in Her 30s

Janeane Garofalo
as Herself

Tim Robbins
as Himself

Edie Falco
as Herself
View All

News & Interviews for Then She Found Me

UK Critics Consensus: Tropic Thunder Soldiers On; Then She Found Me Is Found Out

View All Then She Found Me News

Critic Reviews for Then She Found Me

Unexpectedly sharp, light and appealing; a testament to Hunt's skills behind the camera.

Everyone acts decently and you have to praise Hunt for her tenacity. But this suffers from some fairly dire cinematography and a manufactured air that prevents the watcher connecting to the whole thing.

Hunt's lovely voice, pitched in that diurnal-dizzy limbo between mezzo and soprano, is perfect for mid-life crisis. So is her gawky, strung-out, tragicomical body language.

It's a glum and amateurish business on the three-in-one subject of adoption - being adopted, having your child adopted, and adopting one.

It's not the only misstep in Oscar-winning actress Helen Hunt's first film as director, which is a shame because she does a lot of things right.

The tut-tuttingly dull script refuses to supply a single happy line until Hunt squares up to the sudden arrival of Bette Midler.

Quietly sneaks up on you when you least expect it and delivers a powerful emotional punch.

Trying to establish a serio-comic tone is a task best suited for seasoned directors. Given that a boom microphone drops into the film frame at least twice, Hunt has more basic production elements to master.

For all its half-hearted attempts to trip expectation, Hunt's adaptation of Elinor Lipman's novel is ultimately a romcom wherein themes of adoption and betrayal come with too much sensitive, careworn soul-searching.

The loudest laughs in this "serious comedy" came from three brief appearances by author Salman Rushdie as a doctor.

Audience Reviews for Then She Found Me

If you are a romantic, you will like this movie. The main characters are all going through major changes in their lives - April's marriage is falling apart and the is 39 with no kids; Bernice is feeling left out of the daughter she gave up as an infant; Frank is having difficulty raising his kids. The movie takes all these issues and more and ties them up in a neat bow.

The movie has a good cast, a ton of perspectives about love, life, relationships and the seeds parents sow. If your looking for a film with acoustic guitars, family matters, and good tempo without being unrealistic then watch "Then She Found Me".

Interesting movie. I didn't know if I was liking it much until I got towards the end. The film grows slowly on you. By the end credits I was totally digging the film and was elated with the ending...

Then She Found Me Quotes