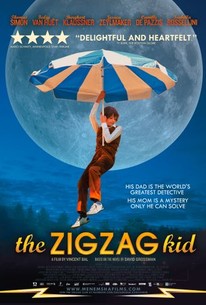 A witty, spirited and action-‐packed adventure about an almost-‐thirteen-‐year-‐old boy named Nono, his world of confusions, fears and fantasies... Nono longs to be a good detective like his father, a famous police inspector, but his wild nature constantly gets him into trouble. Gaby, his father's secretary, cherishes Nono and recognizes his anguish, which comes from his lack of knowledge about his mother, who died when he was very little. Two days before his bar mitzvah, he is sent off to his uncle's to be disciplined yet again. Once on the train, the over-imaginative boy discovers one last chance to prove himself. Together with charming international thief Felix Glick, an old acquaintance of his father's, he travels to the French Rivera and enters a world of disguises and crazy pursuits, crossing paths with the famous singer Lola Ciperola (played by Isabella Rossellini) and Zohara, a mysterious woman whose secrets will forever change Nono's life. Based on the beloved novel by David Grossman, The Zigzag Kid uses wit and humor to explore the most fundamental questions of good and evil and to speak directly to adults and teenagers. (C) Menemsha

Paolo Smalhout
as Micha
View All

Simon is immensely appealing in the lead - smart, resourceful, weighed down with a few more cares than a kid his age should have.

Say yes to the cute and clever "Nono."

It's nice to see a challenging topic being tackled in a family-friendly film like this. The Zigzag Kid's irresistible charm leaps off the screen thanks to Bal's flourishing imagery and gifted cast.

There are no featured audience reviews yet. Click the link below to see what others say about The Zigzag Kid (Nono, het Zigzag Kind)!