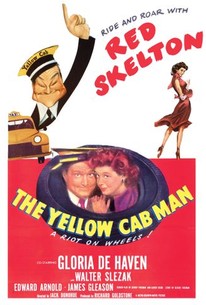 Obviously inspired by the success of Red Skelton's The Fuller Brush Man, The Yellow Cab Man stars Skelton as a Rube Goldberg-type inventor who can't seem to stay out of trouble. He also can't hold down a job, either, much to the consternation of girl friend Gloria De Haven. Through the auspices of cab driver James Gleason, Red is hired by the Yellow Cab company, nearly losing his job on the very first day when he gets mixed up in a chaotic wedding reception (in her last feature film appearance, Polly Moran is screamingly funny as the bride's mother). It's all over for Red when he attempts to demonstrate his latest invention, break-proof glass-resulting in a bad bop on the noggin for boss Paul Harvey. Our hero redeems himself by capturing a gang of crooks (among them Walter Slezak and Ray Collins) in an elaborate slapstick finale involving a revolving model home, a hypodermic-shooting toaster, a helium-filled balloon, and a Tarzan-like swing from the rafters of an empty warehouse. Halfway through The Yellow Cab Man, there's an amusing precursor to the "LSD Trip" films of the 1960s, as a drug-benumbed Red Skelton experiences a series of surrealistic dreams.

There are no critic reviews yet for The Yellow Cab Man. Keep checking Rotten Tomatoes for updates!

There are no featured audience reviews yet. Click the link below to see what others say about The Yellow Cab Man!