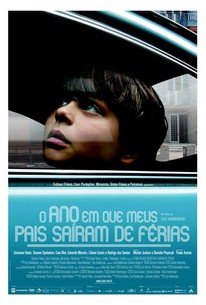 Critics Consensus: Hamburger deftly refracts the sociopolitical tumult of early '70s Brazil through the lens of a young boy's coming of age, and Joelsas' performance is wise beyond his years.

Critics Consensus: Hamburger deftly refracts the sociopolitical tumult of early '70s Brazil through the lens of a young boy's coming of age, and Joelsas' performance is wise beyond his years.

Critic Consensus: Hamburger deftly refracts the sociopolitical tumult of early '70s Brazil through the lens of a young boy's coming of age, and Joelsas' performance is wise beyond his years.

A 12-year-old Brazilian boy who longs to see his team win out over Italy in the 1970 World Cup match finds his entire world turned upside down as his left-wing parents are forced into hiding and he is sent to live with his grandfather in São Paulo's Bom Retiro district. Though his country is being held in the grip of a military dictatorship and the war in Vietnam is raging abroad, young Mauro can't seem to think about anything else but the upcoming World Cup match between Brazil and Italy. If Jairzinho, Pelé, and company can just win their third World Cup title, team Brazil will earn their third star on the strip -- a feat that no other team in the history of the sport has ever managed to accomplish. When his Catholic mother and Jewish father are suddenly forced to go "on holiday," young Mauro is swept out of his middle-class existence in Minas Gerais and taken to stay with his paternal grandfather in bustling Bom Retiro. A multi-ethnic district in which Jews, Arabs, and Greeks all live side by side, Bom Retiro begins to heat up with World Cup fever as things both at home and abroad all seem to be spiraling toward disaster. ~ Jason Buchanan, Rovi

This Brazilian coming-of-age drama, co-produced by City of God creator Fernando Meirelles, charms because it rarely spells things out.

Be patient and brace yourself for the climax; the wait is definitely worthwhile.

Director Cao Hamburger, a Brazilian of Italian and German descent, treats this development with a very light hand.

The Year My Parents Went on Vacation seems to be about, in the end, is big-time sport as the opiate of the masses.

This nuanced coming-of-age drama by Cao Hamburger exudes warmth without getting mired in nostalgia.

This 1970-set tale of a 12-year-old shaped by three driving forces--his country's brutal dictatorship, his left-wing parents' disappearance and a nation's obsession with the World Cup--pulls you into a well-observed world and its characters.

The little empathy that the opening of the coming of age story transmits to me, vanishes when I witness the triviality of innocence, the calculated sentimentality. [Full review in Spanish]

Has an authenticity and sense of genuineness that is truly beautiful.

A painless enough movie, which is precisely the problem

Heavy on nostalgic charm, but a lovely and insightful portrait of children buffeted by their parents' leftist activism in the 1970's and of São Paolo's Jewish neighborhood.

You've heard this story before, but what makes The Year My Parents Went on Vacation worth seeing is the unfamiliar setting...the Jewish community of Sao Paolo.

Relying on solid performances, this is an enjoyable coming-of-age drama that touches us and amuses us in the same proportion, even if it doesn't stand out as particularly outstanding or politically relevant despite taking place in this particular moment of Brazilian history.

[font=Century Gothic]In "The Year My Parents Went on Vacation," it is 1970 and Mauro(Michel Joelsas) is driven by his parents(Simone Spoladore & Eduardo Moreira) to Sao Paulo to be dropped off with his grandfather Motel(Paulo Autran) before they can go on vacation. They promise to return before the start of the World Cup which Mauro like most of Brazil is eagerly awaiting, packing his table soccer game and soccer ball. But unbeknowst to them, Motel died shortly before they arrived. So, his neighbor Shlomo(Germano Haiut) reluctantly agrees to take care of the boy. Needless to say, they do not get along and Shlomo is aghast that Mauro is not Jewish.[/font] [font=Century Gothic][/font] [font=Century Gothic]So, here's what really happened: Mauro's parents had to go underground because they were political opponents of the dictatorship. In "The Year My Parents Went on Vacation," there are many more people paying attention to the events of the World Cup for which businesses close then the political situation. Even the leftists are watching the games on television. So in depicting an event that unites so many, identity is also a key as Mauro discovers a good deal about his family's past and that there is no simple answer to being a Brazilian. [/font]

Cinema from Brazil comes to us in few and far between circumstances. Thank goodness we get all the gems. A touching and tragic story from the Brazilian military regime era.