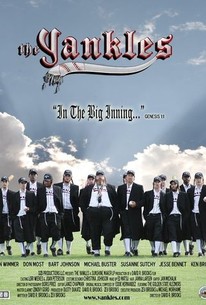 A man looking for a second chance at life crosses paths with a team with practically no chance at all in this comedy. Charlie Jones (Brian Wimmer) is a former major league baseball player whose alcoholism ended his career in center field and ruined his personal life after his wife left him and he ended up in prison following his third drunk driving conviction. As part of his parole, Jones has to serve nearly 200 hours of community service, and while he's eager to coach an amateur team as part of his penalty, no one seems willing to take a chance on him. However, that's before he meets Elliot (Michael Buster), an Orthodox Jew studying to be a rabbi who's trying to salvage the hapless baseball team at his yeshiva school. The team, nicknamed "The Yankles," are desperate enough to try anything, even taking on a pariah like Charlie as their new coach; Charlie soon discovers that these Orthodox theology students aren't necessarily cut out for baseball, but as he and his players et to know one another, he gives them a new measure of skill and confidence, and they help him regain the self-respect he though he'd lost forever. Also starring Bart Johnson, Don Most and Susanne Sutchy, The Yankles was the first feature film from director David R. Brooks.

Don Most
View All

Critic Reviews for The Yankles

Much like a baseball team, The Yankles is not just filled with heart. It has depth and layers within its various elements, which bring the drama and deeper meaning to the film beyond the obvious laughter.

Debbie Lynn Elias
Behind The Lens
View All Critic Reviews (2)

Audience Reviews for The Yankles

There are no featured audience reviews yet. Click the link below to see what others say about The Yankles!