The World Made Straight2015 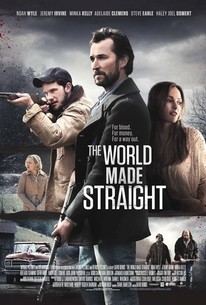 The World Made Straight Photos

A troubled young man (Jeremy Irvine) from a haunted rural comunity struggles to summon the courage to start a new life in this coming of age drama from Millennium Entertainment and first-time feature director David Burris. Minka Kelly, Noah Wyle, Adelaide Clemens and Haley Joel Osment co star in a film based on a novel by Ron Rash. ~ Jason Buchanan, Rovi

News & Interviews for The World Made Straight

View All The World Made Straight News

Critic Reviews for The World Made Straight

The film illustrates how the most powerful and welcome stabilizing forces in human life - history, family, geography - can turn so easily into deadly traps.

A strong sense of place emerges, if not a consuming narrative, as the filmmaker strains to connect a 1970s coming-of-age story to historical records and bigger thematic arcs - namely, bloodlines and bloodshed in a rural community.

An overcooked adaptation of a novel by Ron Rash.

The performances are strong... and Earle is particularly memorable. The film glows with a dark energy when he's on screen. But it's too long, has a musical soundtrack that's often intrusive, and sometimes sags when it should be taut with tension

Jeremy Irvine is the sympathetic focus, but it's Noah Wyle who holds the movie together, as a former teacher who lost his job through a malicious student's prank.

Fine performances compensate for the overwrought elements of this rural-set drama.

A microcosmic microscopic examination of introspection...a slow, methodical, atmospheric burn that celebrates the gravitas of performances from the likes of Jeremy Irvine and Noah Wyle.

Gets drunk on its own solemn resonance and turns its intriguing elements of tragic fate and warps them into eye crossed foolishness.

The Civil War was about the South not wanting to give up its slaves. Now it won't give up its drugs. 'Rednecks and drugs: one of the worst hookups of the '60s.'

The film's story is a simple one, which makes its two-hour running time absolutely confounding.

Yes, this is one of those low-budget gems you're always hearing about. Sub-par production values, certainly. But an intriguing story with excellent acting.

Audience Reviews for The World Made Straight

Sort of interesting take on post-Civil War feuds in the South, but it doesn't really go anywhere.

The World Made Straight Quotes