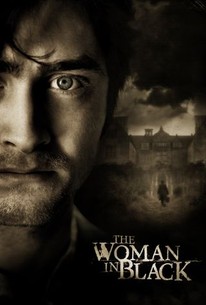 Critics Consensus: Traditional to a fault, The Woman in Black foregoes gore for chills -- although it may not provide enough of them for viewers attuned to more modern, high-stakes horror.

Critics Consensus: Traditional to a fault, The Woman in Black foregoes gore for chills -- although it may not provide enough of them for viewers attuned to more modern, high-stakes horror.

Critic Consensus: Traditional to a fault, The Woman in Black foregoes gore for chills -- although it may not provide enough of them for viewers attuned to more modern, high-stakes horror.

The Woman in Black Photos

A young lawyer (Radcliffe) travels to a remote village where he discovers the vengeful ghost of a scorner woman is terrorizing the locals. -- (C) CBS Films

Lucy May Barker
as Nursemaid

News & Interviews for The Woman in Black

View All The Woman in Black News

Critic Reviews for The Woman in Black

The moody, beautifully composed production raises it above the norm.

It all works reasonably well but the film lacks real punch.

[A] busy, bustling ghost story that at times appears less indebted to the Susan Hill bestseller than the Haunted Mansion ride at Disneyland.

The story has worked in performance before. As a stage play it has run and run. As a movie it plods and plods.

Director James Watkins expertly uses shadows and empty spaces to create a percolating sense of dread, and he waits until the last possible moment before allowing his audience the catharsis of a shock.

Some effective scares, but this is haunted house horror by numbers.

Be afraid. Be very afraid of The Woman In Black. It will scare you to death.

[D]espite its period setting, this Woman in Black is an effective modern horror; one which, like its petrifying protagonist, is sure to haunt your dreams.

Even if The Woman in Black is less than the sum of its spooky moments, it delivers some genuine chills. And Radcliffe is well supported...

[The Woman in Black] displays a sense of real style and real fear, driven by mythology that works on both the rational and the visceral levels.

Audience Reviews for The Woman in Black

Really didn't expect to like this, but I did. Really creepy once it gets going and I loved the ending.

Nicely old-fashioned, beautifully shot and with quite a few goosebump inducing scenes. Only the ending falls a bit short.

This is a CBS film, and a Hammer Film production. That should already tell you everything you need to know about the quality of this supposedly gothic horror film. The effects are horrible in this film, whether it's the obvious green screen driving scenes, the bad after effects fog in the beginning, or the ghostly effects, which look atrocious. There is no logic in this film whatsoever. There's a terrible secret in a small English town, and when solicitor Kipps (Radcliffe) goes there, his actual presence could threaten lives. Does anyone tell him the terrible secret and save people's lives? No, because....? Then there's the scenes when Kipps is in this old, haunted mansion doing paperwork, and he repeatedly does stupid things. He sees a face in the window, and he goes to that window. He sees a creepy image at the front door from the upstairs window, and then opens the door. Every character is idiotic in their choices. There's no backstory except for the one that Kipps unearths in the house. We don't learn about the family's relationship, who Jennet really is or what she wants in the afterlife, and nothing gets answered. There's no logic, and there's no answers. There's constant jump scares, which is the only element of the film that's actually scary. These jump scares are never well done either, because most of them don't even include the ghostly presence of the woman in black. There's literally a jump scare every two minutes in this film, and you're always aware they are going to occur. The ending, in the midst of a lack of logic, also makes no sense and simply ends without explanation. This entire film is one big let-down, and if it doesn't endlessly frustrate you, then you must be a saint.

Daniel Radcliffe, channeling Peter Cushing, visits a moldy old house away out on the moors. There's a secret tragedy there, disgruntled locals, and terrible outcomes in this poetic return of the Hammer films of old. If you enjoy your ghost stories, chasing shadows, and enjoy them sad and melancholic, creepy and foreboding, this is just the ticket, the best I've seen in this genre since The Others. While not replete with a scare-a-second like a thrill park ride perhaps this does fully embrace the "it was a dark and stormy night" aesthetic that so invigorates.

The Woman in Black Quotes