The Wolf of Wall Street2013 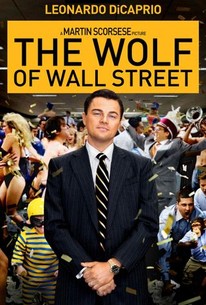 Critics Consensus: Funny, self-referential, and irreverent to a fault, The Wolf of Wall Street finds Martin Scorsese and Leonardo DiCaprio at their most infectiously dynamic.

Critics Consensus: Funny, self-referential, and irreverent to a fault, The Wolf of Wall Street finds Martin Scorsese and Leonardo DiCaprio at their most infectiously dynamic.

Critic Consensus: Funny, self-referential, and irreverent to a fault, The Wolf of Wall Street finds Martin Scorsese and Leonardo DiCaprio at their most infectiously dynamic.

The Wolf of Wall Street Photos

Martin Scorsese directs the story of New York stockbroker Jordan Belfort. From the American dream to corporate greed, Belfort goes from penny stocks and righteousness to IPOs and a life of corruption in the late 80s. Excess success and affluence in his early twenties as founder of the brokerage firm Stratton Oakmont warranted Belfort the title "The Wolf of Wall Street." -- (C) Paramount

Bo Dietl
as Himself (Cameo)

Jon Spinogatti
as Nicholas the Butler

Thomas Middleditch
as Stratton Broker in a Bowtie

Natalie Bensel
as Bottoms Up Hooker

Sebastian Tillinger
as Another Broker

Zineb Oukach
as Hostess on the Naomi

Allyson Carr
as Stripper on Yacht

News & Interviews for The Wolf of Wall Street

Jonah Hill’s Best Movies
Now Streaming: The Equalizer, A Walk Among the Tombstones, and More
RT on DVD & Blu-Ray: The Wolf of Wall Street, Delivery Man, and More

View All The Wolf of Wall Street News

Critic Reviews for The Wolf of Wall Street

Is it immoral to celebrate villainy? There's not much point in pretending The Wolf of Wall Street doesn't do that, pretty exuberantly too.

Every time I looked at my watch, the hands seemed to have stayed still.

The Wolf of Wall Street does not quite have the subtlety and richness of Scorsese's very best work, but what an incredibly exhilarating film: a deafening and sustained howl of depravity.

DiCaprio has hinted before that comedy might be his natural calling -- think of Catch Me If You Can -- but his energy here is not just fun, it's discovery.

For three hours the movie operates at a ridiculous comedic pitch. You never forget you're at the circus. You never lose site of the lawlessness, the reckless pleasure, the sheer lunacy and lack of regulation.

Martin Scorsese roars back to the screen with The Wolf of Wall Street, a three-hour marathon stuffed with dark humor, gross-out gags, a fistful of Quaaludes and one awesome performance by Leonardo DiCaprio.

Trim an hour of the repetitive smut and insert a cohesive thesis for DiCaprio's performance to rely on and maybe this would have earned all the praise it has received.

Terence Winter, creator and writer of The Sopranos, has written a marvelously comedic script, with howlingly funny bits of dialogue. But perhaps its most magnificent accent is the delightful DiCaprio in perhaps his best union yet with Scorsese.

The Wolf of Wall Street isn't a film: it's a party. But so what? We're all invited.

... fun and funny and brilliant and hilarious and just kills it with THE EXCESS.

When Wolf of Wall Street focuses on Belfort's business and stays in the workplace, it is at its best, taking viewers on an exhilarating ride... But, oddly, the biggest problem with this film about excess and over indulgence is that it feels too excessive.

Audience Reviews for The Wolf of Wall Street

Besides being somewhat funny (scattered laughs here and there), I immensely recommend it because it's also an inspirational movie about a highly inspirational figure!! (Yeah, go figure!) Don't miss this family movie that's worth every minute of its short runtime!!!

With this mordacious biopic full of nuances about a true Gordon Gekko disciple, Scorsese takes us into an incredible universe of overwhelming ambition, helped by a top-notch cast and making brilliant use of a hysterical humor to expose the ludicrousness of his despicable protagonist.

Jordan (Leonardo DiCaprio) does a great job playing a depraved stockbroker, but the movie went on and on. I didn't last beyond the first 3/4 hr.

The greatest thing about this addictive, chaotic, machismo piece of beefcake movie magic, would have to be Scorsese's ability to slow down where it hurts, and show big moments in really long scenes. The life of Jordan Belfort is portrayed as a mélange of orgies, parties, business dealings, extortion, pure crime, and unabashed and unapologetic decadence. Even from the start of the film Belfort is unapologetic, which may be the true theme of the entire film. Though he feels neglectful of his family, irresponsible in his business dealings, and drug addled to the point of insanity, in the end he really feels unapologetic. Having a character like this is refreshing, since we haven't seen this level of criminality since Gordon Gekko. Not only is Belfort uncaring, but he traverses in a world of richness and depravity that we couldn't even handle. Scorsese takes his time, and creates big, beautiful set pieces, that take a lot of time and explain very little in terms of plot. These scenes are amazingly intricate and are some of the most memorable moments of the film. The entire sequence when Belfort (DiCaprio) is on lemons and has to make it home from the country club, could have been trimmed, but because Scorsese let it go on and on we got to appreciate the level of helplessness Belfort was going through. We saw his immaturity, his guilt, and his horror at the state of his life, and that can't be replicated in any one line of dialogue. The scene where they're speaking about the contract with the dwarves and how they should have been treated, could have been cut easily, but it shows how Belfort and his associates treated those they could buy, and led to one of the funniest moments in the film. This film is downright hilarious at many points, especially when dealing in character development. Jonah Hill deserved that Best Supporting Oscar nomination, because he not only handles diverse moments of dramatic tension, but he's laugh out loud hilarious. Donnie Azoff could not have been played by a funnier person, or a better actor, and every time he's onscreen it's another chance for us to see just how removed from reality these people really are. There's also a level of opulent violence that shifts underneath the surface that we don't always see, but we know it's there. While movies like "Scarface" put the prospect of violence in the forefront of your mind, "Wolf" builds its tension over time, until characters erupt. While Belfort may not be violent towards his wife throughout most of the film, he is emotionally abusive and their fights are temperamental. It makes that much more sense when things become physical. There were some excellent performances from many of the cast, especially DiCaprio in the lead role. While many of DiCaprio's roles kind of blend together for me, this was a truly unique, unequivocal performance. Belfort's brazen love for business, and building himself up to the highest level possible, is his undoing time and time again. He can't walk away, even when he's offered an out, only because of his pride. Even today Belfort makes his money easily, with a level of persuasion that can only be portrayed by DiCaprio. Hill is enigmatic and perfectly crazed as Azoff, Margot Robbie is a delight in her role as Belfort's second wife Naomi, Matthew McConaughey is just the right level of kooky misanthrope as Belfort's mentor in the beginning, Rob Reiner is perfect as Mad Max Belfort, a man who is always angry and always influenced by his son's schemes, and Kyle Chandler is a surprisingly entertaining choice for the FBI agent who takes Belfort down, commanding his time onscreen with a very complex and layered performance. This isn't exactly a love letter to the world of Wall Street, or even to the lives of the rich and famous. We as the audience don't want to see Belfort succeed or fail, we just want to see what he does next. Belfort's life is so chaotic and crazed that he seems unreal in such a huge sense. Between the legions of hookers, the drugs, the money, and the antics of his entire office, the film plays more like the exploits Caligula than the playboy world of a charlatan like Belfort. For many, they found no insight into the moral capacity of the character. Without morality critics decided that this was a hollow perspective intent on showing indulgence. I disagree heartily, and would argue that this is much more a character study than anything. There's solid humor to this film, there's a decent level of character development, and for what it's worth, there doesn't need to be a moral. Scorsese shows us that these men exist, and they are getting away with everything, to the point where they can brag about it. Scorsese doesn't want us aligning ourselves with the likes of Belfort, and he certainly isn't legitimizing the exploits of his company. He set out to make a "ferocious" film, and he did just that, creating a black comedy that shows what modern day indulgences look like, and how they are being employed by everyone and anyone who can get their hands on their version of the American Dream.

The Wolf of Wall Street Quotes