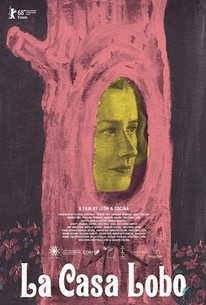 Mary is a girl who seeks refuge in a mysterious house in southern Chile, after escaping from a sect of German religious fanatics. There it is welcomed by two pigs, the only inhabitants of the place. As in a dream, the universe of the house reacts to the feelings of Mary. The animals slowly transform into humans, and the house into a nightmarish world. Made in stop-motion and inspired by the case of Colonia Dignidad - a torture center in Pinochet's time - "La Casa Lobo" appears to be an animated fairy tale produced by the cult leader to indoctrinate his followers , resulting in a dark universe of gothic referents and psychological horror.

This film is indescribable and amazing.

I may be the wrong person to speak of the true meaning under the layers of allegory, but I can certainly tell you that regardless of the understanding you bring to it, The Wolf House makes for a greatly troubling time.

An elusive animated feature in stop-motion that allows connections to be made with the children's stories of the Grimm Brothers and the surreal impulse of Jan Svankmajer.

Besides explaining a damaged psyche to us, Cociña and León imagine it in front of us. [Full Review in Spanish]

An intense visual experience that explores the parallel realities that one creates to repress intolerable realities. [Full Review in Spanish]

The film as a whole is made up of numerous layers of narratives and visuals that seek to show chaos and reconstruction. [Full Review in Spanish]

It's evident the originality of these filmmakers in the Latin American context. [Full Review in Spanish]

Although the film hardly exceeds 60 minutes, it does demand a certain patience that is rewarded with a remarkable demonstration of ingenuity and audacity on the part of the directors. [Full review in Spanish]

The Wolf House has an emotional impact thanks to the excellent technique of animation that Cociña and León use to narrate their story. [Full Review in Spanish]

The twists ... aren't going to put the kids soundly to sleep. Not unless they want the nightmares to start pouring in.

The Wolf House succeeds on every level: as an innovative stop-motion animation film; as a disturbing horror film; as a commentary on Chilean history; and as a meditation on the rationalizations for and trauma of childhood abuse.

There are no featured reviews for The Wolf House (La casa lobo) at this time.