The Witch Who Came from the Sea1976 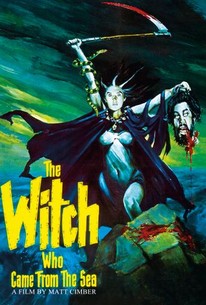 The Witch Who Came from the Sea Photos

Two interesting figures in offbeat cinema -- director Matt Cimber (who was married to Jayne Mansfield and directed her final film before going on to a handful of expressive blaxploitation efforts) and screenwriter Robert Thom (who wrote Wild in the Streets and Bloody Mama) -- teamed up for this unusual portrait of one woman's descent into madness. Molly (Millie Perkins) is a woman who is haunted by vivid memories of abuse and molestation at the hands of her father, who was a ship's captain; now middle-aged, Molly is obsessed by the ocean and images associated with pirates and sailing lore, which fill her with both fascination and loathing. Molly dotes on her young nephews (Jean Pierre Camps and Mark Livingston) and often spins tall tales for them in which her father is a noble hero, but her sister, Cathy (Vanessa Brown), is not comfortable with her presence, and soon the boys are old enough to spend their time elsewhere. Single and lonely, Molly longs for a man, and is openly attracted to strong, burly types, but at the same time she bears a deep hatred for them, and sometimes murders and dismembers the men she lures into her home. However, given Molly's penchant for fantasy, how much of her story is real, and how much is the product of her twisted imagination? Shot in 1971 but not released until 1976, The Witch Who Came From the Sea was one of the first feature films for cinematographer Dean Cundey, who later went on to work with Steven Spielberg and Ron Howard.

Critic Reviews for The Witch Who Came from the Sea

Works more as a psychological horror verging on slasher, not requiring such an ugly display of sexual violence as other 'popular' rape-revenge movies.

It all climaxes in one of the most affecting, tragic and strangely beautiful final acts I've ever seen a horror movie. If you can even call THE WITCH FROM THE SEA simply a horror movie. It is one, but it's so much more...

If you ever find yourself arguing that the idiots behind the 'video nasties' list didn't have a clue what they were doing, The Witch Who Came from the Sea should be your Exhibit A. This film doesn't deserve its schlocky reputation.

Molly... is a complex flesh-and-blood character whose derangement is presented with immense sensitivity and sympathy - and her descent into madness is figured less as visceral slice-and-dice than as heightened domestic tragedy.

Straddles an exploitation line in telling a simple tale with an unexpected degree of pretense and, if only occasionally, artistry.

An absurd story with no redeeming qualities

Audience Reviews for The Witch Who Came from the Sea

Bizarre mish-mash of sexuality, horror, terrible & great writing, exploitation and art-house, that works just over 50% of the time. Certainly one for those interested in bizarre forgotten horror films.

The Witch Who Came from the Sea Quotes