The Wildest Dream: Conquest of Everest2010

The Wildest Dream: Conquest of Everest (2010) 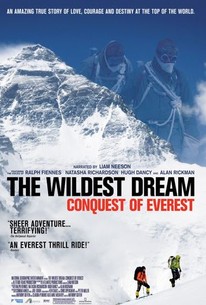 Eighty-five years after George Mallory s final attempt to summit Mount Everest, The Wildest Dream explores Mallory s obsession with becoming the first person to reach the highest place on Earth. Told through the explorer s poignant and evocative letters to his wife, Ruth, previously unseen photos and film archive from 1924 (restored from the original nitrate especially for the film), dramatization and a modern-day expedition retracing the original route taken in 1924, Mallory s incredible adventure lives again. The expedition was led by renowned mountaineer Conrad Anker, whose life became inextricably linked with Mallory s after he found Mallory s body on Everest in 1999. Using replica 1920s-era clothing and equipment, Anker sets out to solve the great mystery of whether Mallory succeeded in summiting Everest before he died he was last seen just 800 feet from the summit before the clouds closed in and he disappeared into legend. The most heartbreaking clue: All of Mallory s belongings were found intact on his body, except the photograph of his beloved Ruth, which he promised to leave at the top of the world if he succeeded. -- (C) National Geographic

Critic Reviews for The Wildest Dream: Conquest of Everest

With the exception of some TV-duff recreations and CSI-style razzle-dazzle it is fascinating.

It's all a bit hokey, though the mountaineering footage is often spectacular.

You may not believe it's possible to bore people to death with a film about risking your life, but The Wildest Dream comes shockingly close.

The film's swooping shots of Everest's jagged shoulders and unforgiving flanks are appropriately breathtaking, but it's in the small human moments where Wildest Dream gets interesting.

The layers of narrative prove too diffuse, and there is not a good enough arc to hold a cinema audience for the duration.

For lovers of the greatest of outdoors, The Wildest Dream is a worthy excursion, especially on the big IMAX screen.

It will haunt you for days. And inspire you forever.

You'll be sweaty-palmed and mildly nauseous -- in the very best way.

Audience Reviews for The Wildest Dream: Conquest of Everest

"Why do you want to climb Mount Everest?" "Because it's there".....haunting and inspiring, i wish he did conquer the Everest in 1924.

A really interesting story (both past and present) and amazing footage of a place that most of us will never go.