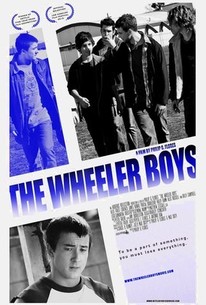 A teenager reconsiders the sibling who's been a hero to him in this independent coming-of-age drama. Ted Wheeler (Lorenzo James Henrie) looks up to his older brother Truck (Alex Frost), who's the closest thing to a strong adult role model in his life -- their father (Billy Campbell) is a bitter, disabled alcoholic who emotionally checked out years ago, their mother ran away years ago, and Truck has had to raise his little brother mostly on his own. Ted is about to enter high school as Truck begins his senior year as a star of the football team; Truck wants to help his brother, so he persuades his fellow members of "The Kings," an informal high school gang, to let Ted join the club. Ted begins to have second thoughts about Truck and the Kings when, as part of his initiation, he's supposed to get a freshman girl drunk and have sex with her; he opts to lie and say he deflowered the girl when he didn't really touch her, but he has to live with the lingering consequences of his story. The Kings' drinking and violence begins to catch up with Ted, and while he has his eye on one of his classmates, a cute but bookish girl named Kallea (Haley Ramm), his lies and the Kings' real indiscretions may put a stake in his future. Almost Kings (aka The Wheeler Boys) was the first feature film from director Philip G. Flores; the picture won the "Find Your Voice" Award at the 2010 Los Angeles Film Festival, sponsored by Netflix, which earned the director over $300,000 in equipment and materials for an upcoming project.

Kasha Kropinski
as Carrie
View All

Critic Reviews for The Wheeler Boys

There are no critic reviews yet for The Wheeler Boys. Keep checking Rotten Tomatoes for updates!

There are no featured reviews for The Wheeler Boys at this time.