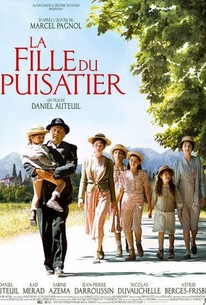 Twenty-five years after rising to international acclaim in Jean de Florette and Manon of the Spring, Daniel Auteuil returns to the world of Marcel Pagnol for his first work as director with this celebrated remake of the 1940s classic. Auteuil stars as the eponymous well-digger Pascale, a widower living with his six daughters in the Provence countryside at the start of World War I. His eldest, Patricia (the luminous Astrid Bergès-Frisbey), has returned home from Paris to help raise her sisters, and Pascale dreams of marrying her off to his loyal assistant Felipe (Kad Merad). But when she's impregnated by a wealthy young pilot (Nicolas Duvauchelle) who promptly abandons her for the frontlines, Pascale is left to contend with the consequences. -- (C) Kino Lorber

François-Eric Gendron
as Captain
View All

News & Interviews for The Well-Digger's Daughter

View All The Well-Digger's Daughter News

Critic Reviews for The Well-Digger's Daughter

"The Well-Digger's Daughter" isn't a mind-blower; it's not supposed to be. It's a light lunch with an old friend whom it's good to see again.

Auteuil's direction is a lot like his acting -- well-mannered and likable, yet staid and ultimately inconsequential.

To call "The Well Digger's Daughter" an old-fashioned film is to pay it a compliment. Here is a love story embedded in traditional values.

"The Well-Digger's Daughter" is perhaps a bit too sentimental. But the performances are so heartfelt that its occasional excesses are easily forgiven.

What resonates is a sense of humanity that sometimes gets lost in films with less regard for traditional storytelling, or respect for simple emotion.

Astrid Bergès-Frisbey as Patricia and Jean-Pierre Darroussin are almost enchanting, but it is Auteuil, entering a new career as mature actor-director, whom we want to cheer.

A thoroughly well-told, if ultimately fairly slight, tale of family honour lost and regained in a France around the time of the Second World War.

This humdrum Thomas Hardy narrative knock-off is as memorable as the holes its main character digs in the ground.

Remake lacks the power of context

The countryside of high Provence is a major character all its own.

Think of it as a pretty good, French-language bucolic entry in PBS' "Masterpiece" franchise and you'll be fine.

Audience Reviews for The Well-Digger's Daughter

I really enjoyed the story of a proud man dealing with the shame of a daughter who winds up paying dearly for a single mistake. This was a well done film, with many tender moments as well as some that were hard to take. The pacing was deliberate, but never dragged, the characters were fleshed out and not merely caricatures, and the cinematography was sensuous. There was a lot to like here, although the ending dipped perilously close to smarmy.

I would be the first person to say that Daniel Auteuil has earned a right to direct a film with his long track record of superb performances. But why did he have to choose something as creaky, dated and melodramatic as "The Well-Digger's Daughter," itself a remake of a 1940 movie of the same name? Ostensibly it is about 18-year old Patricia(Astrid Berges-Frisbey) on the eve of World War II but it is not really since even when doing nothing Daniel Auteuil knocks the movie out of orbit just with his regal presence. Patricia faces limited choices in life between her sexist father Pascal(Auteuil), a well-digger, who complains endlessly about having six daughters and no sons, Pascal's assistant Felipe(Kad Merad) who covets Patricia for marriage despite his being middle-aged and balding and wealthy good-looking Jacques(Nicolas Duvauchelle) who pressures Patricia into having sex at the very least.(And who ever heard of an independently wealthy well-digger's assistant, anyway?) It is actually with Pascal's assent that Felipe is not only interested in Patricia but also a younger daughter. While you could maybe just write this off as a different time, in reality, there is no way this does not come off as plain old creepy which the movie fails to even acknowledge.

After a lower class man's daughter becomes pregnant, he must reconcile the mores of his time with his love for his family. Daniel Auteuil's directorial debut is a delightful, life-affirming film with an understated complexity. The film encounters class issues deftly, as the main conflict involves two nouveau riche men assuming that they should feel a put-upon shame greater than they feel a real love. Sweeping shots of beautiful countryside and finely crafted scenes (though too talky at times) worthy of the stage abound, and Auteuil proves himself to be a very good director. Auteuil and Astrid Berges-Frisbey deliver compelling performances as father and daughter. Overall, this is a nice film to see with nice people to spend time with -- a fine end to a tough week.