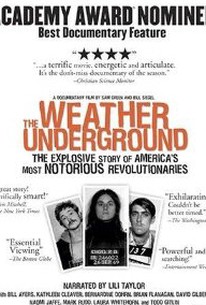 Sam Green and Bill Siegel's documentary about a radical group whose stated goal was the violent overthrow of the U.S. government details a valuable chapter in the history of the '60s protest movement and leftism in America. The Weathermen were a faction of Students for a Democratic Society (SDS), one of the driving forces behind the period's mass protests against social injustice and the Vietnam War. Frustrated by SDS's adherence to non-violent dissent, the Weathermen broke off and adopted a more combative approach. As the student protests ebbed in the 1970s, the group went underground and shifted tactics, embarking on a terrorist campaign against the U.S. government. For years, the Weather Underground evaded the authorities' grasp, even as it pulled off high-profile bombings against government targets. Their momentum petered out in the 1980s, as one by one the organization's members surrendered after years on the run. The Weather Underground uses extensive archival footage and revealing interviews with the surviving members to trace the group's evolution and place their actions in the context of the period's tumultuous events.

Pamela Z.
as Narrator
View All

Critic Reviews for The Weather Underground

If names such as Bernadine Dohrn, Bill Ayers, Mark Rudd, Naomi Jaffe and Brian Flanagan mean nothing to you, you'll definitely want to see the thought-provoking documentary, The Weather Underground.

The Weather Underground leaves the viewer with many questions. To the filmmakers' credit, most of them are the right and urgent ones to ask.

Directors Sam Green and Bill Siegel expertly limn the forces that gave rise to Weatherman and clearly sympathize with the group's motivations. At the same time, they don't stint on Weatherman's follies.

Whose side the documentarians are on is never clear -- in a muddy rather than an ambiguous way. Did anyone die from the Weathermen's bombings? We don't find out here.

An eye-opening look at idealism taken to extremes during one of the most turbulent periods of American history.

Proves to those few of us who try to see both sides of an argument that evil is a mere perception.

Their story is history they don't teach in school, which makes The Weather Underground all the more welcome.

A must-see for anyone interested in one of the most turbulent periods in recent American history.

Audience Reviews for The Weather Underground

Another fabulous documentary featuring one of the more radical elements of the '60s protest movement (at least for white America). This is cat and mouse game between the authorities and those driven to change society in desparate ways.

"The Explosive Story Of America's Most Notorious Radicals." The Weather Underground is a really interesting and absorbing documentary that chronicles an unsure time in America. The Weather Underground bombed many public buildings in protest of pretty much anything violent that the government or police did. To me it's kind of hypocritical, but hey, they were trying. All their trying basically did nothing except make them complete outcasts and make them seem like mentally ill hippies. Their motives were comprehendible, but their actions, not so much. This documentary does a good job presenting the story through footage, interviews with actual Weathermen and little readings of letters and memoirs from the Weathermen. Now, listening to the much older Weathermen talk; most of them seem like your next door neighbor. The film manages to keep the viewers entertained while informing us on an important time in America. A time where we had groups rioting, smashing windows, robbing banks and blowing up buildings; all in the name of the demolishment of an unjust and oppressive government. Join the fight against the oppressor or you are the oppressor is what they believed. If you sit and do nothing in a time of war, when our military is slaughtering innocent civilians in Vietnam; then you are acting in a violent way. You aren't changing or calling for a change in what is taking place in the war. So to me, their beliefs on the war make sense. I just don't think that they went about it the right way.

A sobering and much-needed documentary. Sadly, it only begins to scrape the surface of the importance and context of the Weather Underground. Sadly, this film would be much more at home as a History Channel special event feature, rather than the groundbreaking documentary that still needs to be made about the Weather Underground. Regardless, don't wait around for it. This film is especially a must-see for anyone who wasn't alive during the 1960's and can't seem to bring themselves past retro-caricaturisation of the era. Direct interviews (most notably from the former FBI investigators) are more than welcome addition, although at times it seems as if the film struggles to provide detail without detracting from the coherency of the overall narrative.

Informative, disturbing documentary about a time of great upheaval in the USA, and a group of misguided people who chose the wrong direction to try and make a difference. Just one question why aren't these people in jail?