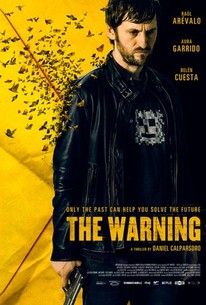 Jon is a young man with a gift for mathematics and an obsession for numerical logic. He is a genius, but lost out on a promising scientific career because of his schizophrenia and had to settle for a job in a copy shop. One night, Jon and his friend David go to buy drinks at a gas station. David enters while Jon waits in the car. Just then, a robbery goes down and a bullet leaves David in a coma. Jon stops taking his medication and, overcome with guilt, he becomes consumed with finding some meaning in the killing of his friend. He investigates past attacks until he comes across the mathematical pattern they follow. Based on this, he deduces that, in nine years, the next victim will be little Nico, unless he manages to get a warning to the boy....

Aura Garrido
as Lucía
View All

A sentimental approach to topics like bullying or euthanasia is more valuable than a tragedy that crosses the logic of time and space.

Its narrative pulse and the magnetism of some of its passages are buried by a predictability that will ruin the experience. [Full Review in Spanish]

The charm of the film relies on its dramatic structure, which leaves out the background and motivations of the characters. [Full Review in Spanish]

A bland thriller which proposes an ideal premise but never drops a heavy resolution. Instead it stays in a safe zone full of plot holes. [Full review in Spanish]

The Warning is a movie without a purpose and a hollow exercise. It's twisty for the sake of being twisty and the surprises land with a thud.

A well-acted and surprisingly affecting thriller, all things considered, and a satisfying mystery, if not a shocking one.

Cleverly plotted, one of the best made-for-Netflix thrillers to date.

It gives the impression that even a good part of the cast has serious difficulties believing in this story... [Full Review in Spanish]

The plot is really stimulating...[Full Review in Spanish]

The Warning deserves to be enjoyed as it is: a product of impeccable design designed for mass consumption, combining police cinema, space-time paradoxes, ancestral curses and mental illness in an attractive cocktail that... [Full review in Spanish]