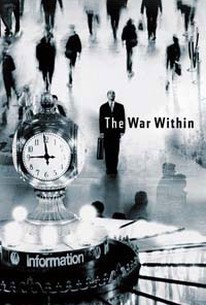 Critics Consensus: The War Within attempts to get into the mind of a terrorist, and the result is believable and unsettling.

Critics Consensus: The War Within attempts to get into the mind of a terrorist, and the result is believable and unsettling.

Critic Consensus: The War Within attempts to get into the mind of a terrorist, and the result is believable and unsettling.

The War Within Photos

The drama The War Within attempts to put a human face on a suicide bomber. Ayad Akhtar plays Hassan, a student from Pakistan matriculating in Paris. He is arrested for being a possible terrorist, and his brutal handling puts him in the mood for revenge when he eventually gets released. He becomes involved in a terrorist organization and eventually makes his way to the United Sates in order to carry out a bombing plot. When the other members in the plan are arrested, Hassan begins living with an old friend of his who lives a normal American life. Hassan begins to question his desire to go through with the bombing plot when he sees the happiness of his old friend.

Per Melita
as Terrorist

Critic Reviews for The War Within

Akhtar, who also co-wrote the screenplay, is unable to convey Hassan's internal conflicts with any force.

The storyline in The War Within is far from fluid and, at times, overwrought. But it doesn't stop the film from capturing one's interest.

Call it a portrait of a mild-mannered zealot, one that seeps under the skin and unsettles the nerves.

This is a film to unnerve any New Yorker, as it wanders city landmarks, like Grand Central Terminal, with destruction in mind...

The premise is indeed engaging, but the conversations are simplistic.

An affecting portrait of the torturous schism between radical Muslims and those who've embraced the West.

You glance at Hassan with sympathy, which is immediately neutralized by the assurance that this man would kill you without a thought in the name of his god. You pray to yours that he'll change his mind.

You just can't believe Hassan can see so much innocent humanity and still choose mass murder. And then Hassan quietly intones "God is great," and you realize he can no longer see them at all.

Audience Reviews for The War Within

The War Within Quotes