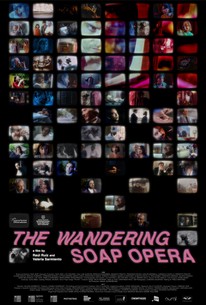 Filmed by Chilean master Raúl Ruiz in 1990 but left unfinished until it was completed by his wife and collaborator Valeria Sarmiento in 2017, The Wandering Soap Opera is a dreamily interconnected series of vignettes that spoof on telenovela conventions while reflecting Ruiz's feelings upon returning to his native Chile after more than 15 years away. In one episode, a man seduces a woman by showing her his muscles, which are actually slabs of raw meat slapped into her hand. Later, the man has a gun pulled on him when he accuses a poet of plagiarism. Meanwhile, through the television screen, five women have lost their husbands after an earthquake and embrace a better future together. All along, back and forth across screens, people are watching. Shot in gorgeous Super 16mm and featuring one zany performance after another from a cast having the time of their lives, The Wandering Soap Opera is a glorious sendup of the telenovela, which, at the end of Augusto Pinochet's dictatorship, Ruiz called the very best lens through which to understand "Chilean reality."

The film hits on all of the director's favorite themes - paranoia, narrative intricacy, fleeting but meaningful friendships - and the surrealist humor is often riotous.

Deadpan and over-the-top, these scenes make for a view of turbulent reality that is episodic and nonsensical - and wholly Ruizian.

The Wandering Soap Opera is only as powerful as your willing-ness to meet Ruiz and his collaborators on their brain-scrambling level.

It was clearly made with slender financial means and abundant enthusiasm, and it functions simultaneously as a critique of the self-serious idiocy of authority and a celebration of the anarchic power of imagination.

Film as séance: this is Valeria Sarmiento's 2017 completion of her late husband's... haphazard super-16mm film shoots in 1990 that did not become one of the hundred-plus finished works of his maddeningly prolific lifetime.

Finished by Sarmiento after Ruiz's passing, The Wandering Soap Opera is a thrilling work, an experiment in genre that evolves into something intensely surreal and political.

Rarely is cinema so fearlessly and effortlessly manipulated into uncharted territory; even in death Ruiz is still boldly pushing it, and us, into the future.

Ruiz wonderfully pastiches the stiffness, the talky longueurs, the abrupt discontinuity of the telenovela style...

There are no featured reviews for The Wandering Soap Opera (La Telenovela Errante) at this time.