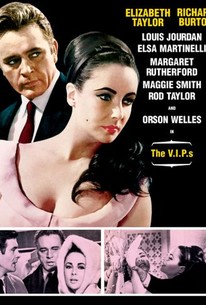 Terrence Rattigan, the playwright who brought us the multicharactered, multistoried Separate Tables, again offers us an episodic cross-section of humanity in The V.I.P.'s. When a heavy London fog paralyzes all air traffic, the lives of several people are profoundly affected. As indicated by the title, most of the characters in this portmanteau film are of the social and/or financial elite. Elizabeth Taylor wishes to leave her enormously wealthy husband Richard Burton in favor of playboy Louis Jourdan. Peripatetic European film producer Orson Welles is hoping to escape London with his newest protegee Elsa Martinelli in order to avoid paying his income tax. Australian businessman Rod Taylor, accompanied by his devoted (and adoring) secretary Maggie Smith, is anxious to head to New York to stave off a hostile takeover of his firm. And impoverished aristocrat Margaret Rutherford (who won an Oscar for her performance) would rather not go to Florida to accept a job as a social arbiter, but the wolf must be kept from the door. Before the fog disperses, you can be sure that at least one of the many plotlines will intersect with another. David Frost, in a tiny part as a reporter, was fond of recalling in later years that, while the major stars of The VIPS were introduced in the opening titles with animated limousines, he was consigned a tiny Volkswagen; alas, no such cartoon joke appears in the film, though on occasion the actors-particularly Mr. Welles-behave as though they were cartoons. Mercilessly skewered by the critics, The VIPS was a winner at the box-office, due in great part to the Cleopatra-inspired publicity concerning the top-billed Liz Taylor and Dick Burton. ~ Hal Erickson, Rovi

Margaret Rutherford
as Duchess of Brighton

Cal McCord
as Visitor
View All

Critic Reviews for The V.I.P.s

Uneven, trite and uninspired in the dialogue and situations involving the various lovers, brilliantly funny and touching in Miss Rutherford's sequences. The result of this is that Miss Rutherford, doughty, indomitable, makes the picture her own.

Trying to shoehorn a talent ensemble into a trite premise results in unmitigated failure.

It's jet-set entertainment for celebrity watchers and those who will watch anything while a passenger in air flight.

Audience Reviews for The V.I.P.s