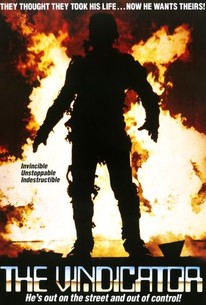 This horror film is a variation on the Frankenstein theme involving the experiments of Alex Whyte (Richard Cox), a robotics engineer for NASA. Whyte has designed a cyborg that incorporates a human brain and a mechanical body. The cyborg is fitted out with a computer program that forces it to react with extreme violence to anything (or anyone) perceived as a threat. In order to shut off this reaction, the cyborg is also fitted out with a remote control receptor that cuts its current if things get out of hand. Theory becomes reality when Whyte murders Lauren Lehman (Teri Austin), a scientist who faults him for his improper use of government funding, and then installs Lehman's brain in the cyborg. The cyborg escapes before the remote control device can be installed and now there is no way to stop its murderous rages.

Critic Reviews for The Vindicator

There are no critic reviews yet for The Vindicator. Keep checking Rotten Tomatoes for updates!

Audience Reviews for The Vindicator

There are no featured audience reviews yet. Click the link below to see what others say about The Vindicator!