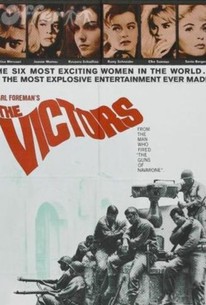 This anti-war saga is taken from the Alexander Baron novel "The Human Kind." Battle weary troops fight their way through Italy and Germany in the final days of World War II. Instead of the honorable and noble portrayals that usually accompany Allied war recollections, these soldiers are more likely to steal, pillage, raid wine cellars and hire prostitutes. The horrors of war are not confined to battles with the enemy as two white soldiers beat up two blacks while the cowardly bar patrons do nothing to stop the injustice. A platoon leader disappears and is later found in a hospital with half his face blown off. The parents of two pretty German girls accept gifts from G.I.s in exchange for their daughters sexual favors, not caring if the loot comes from enemy of ally. Soldiers use puppies for target practice, a young boy willingly offer sex to men from both sides of the battle lines. Produced and directed by Carl Foreman, these unconnected stories of individual experiences paints an unflattering picture of the human race.

Critic Reviews for The Victors

[The Victors'] defects are, essentially, three: (1) there are no people, only movie actors; (2) every point is all too explicit; (3) the points, when examined, prove to be not very sharp.

But on the whole in trying to demolish what the block- buster war film has stood for, Mr. Foreman has used too many of its techniques-even the slow- ness and the interval.

Audience Reviews for The Victors

There are no featured audience reviews yet. Click the link below to see what others say about The Victors!