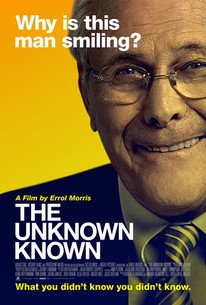 Critics Consensus: Viewers hoping to see Donald Rumsfeld admit making mistakes in public office (or hoping Errol Morris will force him to give straight answers) may find The Unknown Known frustrating -- but no less fascinating.

Critics Consensus: Viewers hoping to see Donald Rumsfeld admit making mistakes in public office (or hoping Errol Morris will force him to give straight answers) may find The Unknown Known frustrating -- but no less fascinating.

Critic Consensus: Viewers hoping to see Donald Rumsfeld admit making mistakes in public office (or hoping Errol Morris will force him to give straight answers) may find The Unknown Known frustrating -- but no less fascinating.

Morris' film THE UNKNOWN KNOWN is a gripping exploration of the career and philosophy of former U.S Secretary of Defense Donald Rumsfeld. Using declassified memos, Morris guides Rumsfeld through a discussion of his controversial career as a high-level executive under four different Republican presidents. Such absorbing topics as Vietnam, the Cold War, Desert Storm and the War on Terror are all examined through the words of one of America's most divisive and complex public figures. (c) Fantastic Fest

News & Interviews for The Unknown Known

View All The Unknown Known News

Critic Reviews for The Unknown Known

By now the director's technique is so savvy, so confident in its visual layering and atmospheric assurance, even a dodgy, cagey camera subject such as Rumsfeld becomes movieworthy.

Morris doesn't "break" Rumsfeld, as some think he did McNamara. He has held a mirror up to the man, and found no reflection. The viewer simply has to realize that what's important is what's not there.

What emerges is a fascinating portrait of a bygone approach to power, marked by a seemingly contradictory mix of transparency and obfuscation. Rumsfeld embodies that discrepancy.

A portrait of a wartime leader determined to avoid, at any cost, an honest perspective.

The Unknown Known is a worthy addition to Morris's body of work, an epic search that demonstrates the limits of language, the ease of sidestepping truth.

A gladiatorial bout for the Information Age, we may not come out knowing a much more than we did going in, but it's hard to dismiss the historical value Morris' interrogation may have in the future.

[A] disconnect between content and intent characterizes the entirety of his film.

As a history lesson in digest form, it's eminently valuable for cracking Rumsfeld's cheshire grin without employing unsound interrogation methods.

Delights in exploring sophistry and fine distinctions of language.

Audience Reviews for The Unknown Known

An extraordinary documentary about one of the most interesting figures in American politics, The Unknown Known is a fascinating look at former Secretary of Defense Donald Rumsfeld. In the film documentarian Errol Morris conducts an extensive interview with Rumsfeld, covering his work in the Nixon & Ford administrations, the events of 9/11, and the War on Terror. A lot of this is done through Rumsfeld's restorations and explanations of his own extensive memorandums and dictations. And, surprisingly it's not as much of a liberal hit piece as one would expect. Though Morris steers the line of questioning at some points, Rumsfeld is allowed to speak for himself; leaving the audience to decide what to make of him. Refreshing and honest, The Unknown Known is a true documentary that allows its subject to take its own course without subterfuge or agenda.

A feature length interview with former Secretary of Defense Donald Rumsfield that (perhaps unfairly, perhaps understandably) turns into a referendum on the Iraqi invasion and the War on Terror. There are no bombshells---Rumsfield is far too savvy to sabotage himself---so this effort only adds a little context for political junkies, while being unlikely to sway anyone's opinion of this enigmatic and powerful man in one direction or another.