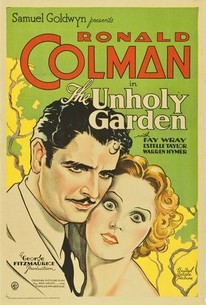 A clever, slyly self-satirical screenplay by Ben Hecht and Charles MacArthur helps to make The Unholy Garden seem better than it is. The title refers to a Saharan oasis where a group of international crooks have converged, free from prosecution. Ronald Colman stars as gentleman thief Barrington Hunt, who rallies his fellow crooks together in a plan to divest a wealthy baron (Dudley Digges) of his fortune. Part of the scheme requires Hunt to make love to Fay Wray, the baron's lovely daughter, a task that proves pleasurable indeed. But Hunt hadn't counted on falling in love with Wray -- and when he does, it's "reformation and redemption" time, with our hero turning on and turning in his former pals. Among the reprobates within Hunt's orbit are such veteran screen heavies as Warren Hymer, Lucille LaVerne and Lawrence Grant, the latter chewing the scenery as a discredited doctor who keeps the skull of his murdered wife in a jar!

Henry Armetta
as Nick the Goose

Critic Reviews for The Unholy Garden

There are no critic reviews yet for The Unholy Garden. Keep checking Rotten Tomatoes for updates!

There are no featured reviews for The Unholy Garden at this time.