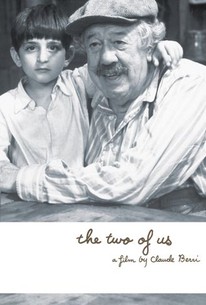 The Two of Us (Le vieil homme et l'enfant) Photos

Having been forced into minor parts for several years by a debilitating illness, veteran film actor Michel Simon made a triumphant return to leading roles in the charming, poignant The Two of Us (Le Vieil Homme et L'Enfant). Simon plays a likeable old soak with one significant character flaw: he is a flagrant anti-Semite. During the Nazi occupation of Paris, 8-year-old Jewish lad Alain Cohen is sent to the country, there to live with the parents of his family's Catholic friends. One of those parents is, inevitably, Simon. Taking a liking to Alain, and unaware that the boy is Jewish, Simon attempts to introduce the lad to the doctrine of anti-Semitism. The boy plays along with the old man, teasing him about his prejudices. Despite their obvious philosophical differences, Simon and Alain form a strong and affectionate bond. Director Claude Berri, whose films have often touched upon the Jewish experience in France, once more draws from his own experiences to weave a sensitive, seriocomic scenario.

Marco Perrin
as The Priest

Anyone who ever managed to open up, as a child, to an older relative or friend whose noxious views still confounded them will recognize the sly, small bargains that Claude makes with himself.

The film's good humour and discretion, plus Simon's virtuoso performance, make it never less than watchable.

Overall the acting as well as the cinematography is a treat.

A heart-warming movie that showcases one of the last performances of the great Michel Simon.

You're unaware of the film's power until the ending (well-earned and happy) hits you with an unexpected well of emotion.

A lovely, sentimental reminiscence of childhood in wartime.

[Claude Berri's] debut stands as one his most accomplished achievements, and is a masterwork of haunting WWII and coming-of-age cinema.

Refreshingly free of bloodshed and bombast, Berri's film proves that you don't need to depict the visceral horrors of World War II onscreen to drive home the lasting impact it had on everyday people.

Simon delivers one of the most memorable portrayals of his brilliant career.

Greatly enhanced by the virtuoso performance of the 72-year-old Michel Simon.

A story that hasn't gone out of style....Perhaps Berri spoke for himself through the old man's self-summation: 'I don't have a church bell for a heart, but I respect life.'

The Two of Us (Le vieil homme et l'enfant) Quotes