The Two Faces of January2014 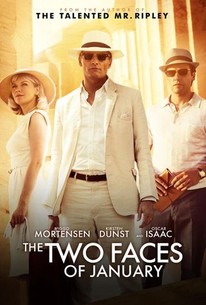 The Two Faces of January Photos

Screenwriter Hossein Amini (The Wings of the Dove, Drive) makes a stylish directing debut with this sleek thriller set in Greece and Istanbul, 1962, and adapted from Patricia Highsmith's novel. Intrigue begins at the Parthenon when wealthy American tourists Chester MacFarland (Viggo Mortensen) and his young wife Collete (Kirsten Dunst) meet American expat Rydal (Oscar Isaac), a scammer working as a tour guide. Instead of becoming his latest marks, the two befriend him, but a murder at the couple's hotel puts all three on the run together and creates a precarious bond between them as the trio's allegiance is put to the test. (C) Magnolia

Omiros Poulakis
as Nikos
View All

News & Interviews for The Two Faces of January

View All The Two Faces of January News

Critic Reviews for The Two Faces of January

[Hossein Amini's] polished storytelling carries this along, generally compensating for the mundane visuals and the actors' skilled but unmoored performances.

At a certain point, it's akin to reading a mediocre murder mystery. You finish it because you're too far in to quit, as opposed to actually caring how things wrap up.

Everything about The Two Faces of January is right, even as the events it describes - a couple's idyllic Grecian holiday, a charming American's adventures abroad - go terribly wrong.

The movie never reaches a boil. Instead, it simmers and simmers until you're suddenly shocked at the hot water you're in.

Things get awfully twisted under that hot Mediterranean sun.

The Two Faces of January may feel like a throwback to the cinema of Alfred Hitchcock, but it doesn't have any of the charm or suspense that propels films.

There's something unnervingly stale about the whole endeavor, like a handsome grocery store cake that's sat on the icebox display too long.

It's a bumpy ride - however, screenwriter Hossein Amini's directing debut is assured and smooth, and the result is classy, compelling, intelligent film noir with a contemporary feel that keeps us guessing to the end.

Unfortunately, as layer upon layer of intrigue is gradually stripped away, what's left in the middle begins to look evermore unappealing.

It is the characters that linger longest after the credits roll, and Amini gets great support from his leading trio.

Audience Reviews for The Two Faces of January

Elegantly filmed and well acted Patricia Highsmith adaptation with a great chemistry between the characters and pretty images of Greece. The big shocker happens already in the middle of the film, from there on out it's still interesting to see where all this is going, but never nail-biting intense. The result is overall still pretty satisfying thanks to the actors.

Average. I mainly watched for Kirsten Dunst. *****mild spoiler***** I wasn't too impressed when she exits the film one hour in. Chester and Rydel were not interesting enough to carry the movie on their own. It's certainly not badly made, but it felt like there should have been a twist or something at the end, and there just wasn't. I didn't even really get why Chester helped at the end. What was in it for him at that point?

An average thriller that leaves a dry taste in the mouth!

Tense, moving and fascinating. With both Issac and Dunst giving very strong performances, Mortensen was the true highlight as the husband on the run with his wife. While the characters of Chester and Rydal showed competition over Colette, I was always routing the former despite his bad deeds. An impressive script and the well chosen actors/actress result in a decent directing debut for Amini. One of the best films I've seen so far this year.

The Two Faces of January Quotes