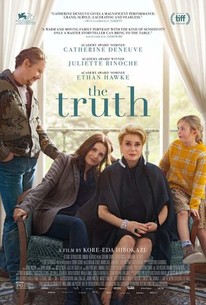 Critics Consensus: The Truth may not stand with Hirokazu Kore-eda's best work, but it finds the writer-director revisiting familiar themes with a typically sensitive touch.

Critics Consensus: The Truth may not stand with Hirokazu Kore-eda's best work, but it finds the writer-director revisiting familiar themes with a typically sensitive touch.

Critic Consensus: The Truth may not stand with Hirokazu Kore-eda's best work, but it finds the writer-director revisiting familiar themes with a typically sensitive touch.

Legends of French cinema Catherine Deneuve and Juliette Binoche join masterful filmmaker Hirokazu Koreeda (Shoplifters, Still Walking) to paint a moving portrait of family dynamics in THE TRUTH. Fabienne (Catherine Deneuve) is an aging French movie star who, despite her momentary lapses in memory, remains a venerable force to be reckoned with. Upon the publication of her memoirs, her daughter Lumir (Juliette Binoche) returns to Paris from New York with her husband (Ethan Hawke) and their young daughter to commemorate its release. A sharp and funny battle of wits ensues between the mother-daughter duo, as Lumir takes issue with Fabienne's rose-colored version of the past. Reflected cleverly by Fabienne's latest role in a sci-fi drama, their strained relationship takes a poignant journey toward possible reconciliation. Charming, bold, and imbued with endless emotional insight, THE TRUTH offers a relatable look at human relationships, featuring exquisite performances from its all-star cast.

Breakdown of 2020 Movie Delays, and When They Will Hit Theaters

Catherine Deneuve is so good it hurts in this dramedy from Japanese auteur Hirokazu Kore-eda.

[Catherine] Deneuve brings plenty of Gallic charm and wit to the table, though the film's concerns are still strictly [Hirokazu] Kore-eda's.

This movie is an absorbing serio-comic flourish.

There's much to relish here.

It feels like a chamber piece because it is: a chance for the director to observe an ocean-going star in all her glory, to see what he can do as her captain.

The Truth, like so much of Kore-eda's work, is fundamentally minor; it has one of those slightly maudlin piano scores that he favors, much too blatantly announcing the wistfulness.

A Chekovian drama filled to the brim with regrets and recriminations, The Trial certainly provides plenty of opportunities to showcase the skills of its two leading ladies.

If you're looking for a unhurried comedy-drama to watch on an early Friday afternoon with some truly exceptional acting, then The Truth certainly fits the bill

Deneuve is mesmerising, but I was also sometimes irritated, particularly by the wistful piano music that would never shut up. It is worth seeing but not, perhaps, as much as Kore-eda's other films, which you would do well to search out online.

Kore-eda manages to have fun with his super characters while also telling a tale of memory and redemption.

At 76, Catherine Deneuve can still blow all-comers off a cinema screen, and she does exactly that in Hirokazu Kore-eda's Truth, which playfully explores the vexed relationship between a French film star and her daughter.

There's a real beguiling, naturalistic performance, even when the central character is insufferable in so many ways...

There are no featured reviews for The Truth (La vérité) at this time.