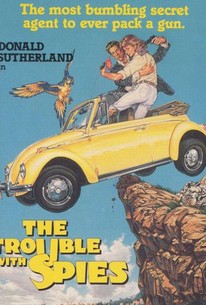 Appleton Porter (Donald Sutherland) is an inept international secret agent sent by the U.S. to the island of Ibiza in this uneven spy comedy. His mission is to secure the secret recipe for a truth serum to use on enemy agents. Appleton miraculously avoids being killed on several occasions as suspicions point to various hotel guests. Hotel owner Mona Smith (Lucy Gutteridge), Harry Lewis (Ned Beatty), and Mrs. Arkwright (Ruth Gordon) soon make addle-brained Appleton feel that someone, if not everyone, is up to no good. The movie was shot in 1984 and shelved for three years --- explaining the presence of Gordon, who died the following August.

Critic Reviews for The Trouble with Spies

An impressive cast but an awful spy film.

There are no featured reviews for The Trouble with Spies at this time.

The Trouble with Spies Quotes