The Trouble with Harry1955 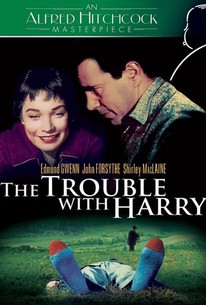 The Trouble with Harry Videos

The Trouble with Harry Photos

In this film, Jerry Mathers stumbles upon Harry's corpse in the woods. Mathers alerts his mother Shirley MacLaine, who recognizes Harry as her ex-husband. Later on, retired sea captain Edmund Gwenn comes across the moribund Harry. Both MacLaine and Gwenn have reason to believe that they're responsible for Harry's demise.

Critic Reviews for The Trouble with Harry

Hitchcock is reluctant to follow the subversive premises of the story through to their outrageous logical conclusion.

Alfred Hitchcock's 1955 comedy has long been overshadowed by the masterworks that surround it, but it's a wonderful, fanciful film, the most optimistic movie he ever made -- a fairy tale among nightmares.

This is a blithe little comedy, produced and directed with affection by Alfred Hitchcock, about a bothersome corpse that just can't stay buried.

This latest of Mr. Hitchcock's efforts is a curiously whimsical thing.

Sprightly is the word for Hitchcock's direction; neither moral nor gruesome, neither childish nor yet quite adult, neither in the world nor quite outside it, it gives the impression of taking you straight into a peculiarly vivid dream.

The acting is perfection, with MacLaine (in her debut) quite wonderful, and Hitchcock was mighty proud of this adaptation of Jack Trevor Story's novel, always naming it among his personal favourites.

Assimilating the black humours of the comedie noire into the gentler comedy of village eccentricity, Hitchcock and his scriptwriter, John Michael Hayes, have concocted an entertainment insidious in its charm.

The film, a radical departure for the director, is one of his most forgotten, and it's also one of his best, a night-black portrait of small-town New England nonchalance and charm.

One of the absolute funniest movies of the 1950s, not least because it is perhaps the most puckish.

A spirited irreverence about the power of death pervades. Think of this as a relief valve compared to most of Hitchcock's other films.

I love it. I've seen it more times than just about any other Hitchcock.

A quiet, picturesque Vermont autumn, its leaves in full color, provides the setting for this splendid Hitchcock black comedy.

Audience Reviews for The Trouble with Harry

This is a delightfully twisted film from old Mr. Hitchcock. Set in a small Vermont town during autumn, this is a mystery/comedy centered around a dead body. A man named Harry is found dead by a small boy who immediately goes and tells his mom. As she and others happen upon the corpse, they all, for different reasons, think they are to blame in some way for his demise. What follows then are their many attempts to hide the body and cover their tracks as the threat of being caught looms over head. This is somewhat atypical Hitch because it is the closest he ever came to overt comedy. Granted, it's about a corpse, and the bulk over the humor is of the dry, and darkly morbid variety, but still, even with some suspense, this is a rather lighthearted affair. It's got a good set up, and some wonderful moments, but I do think the ending is rather problematic, mostly because it seems rushed and tacked on. Everything else though is fine. We get a good cast and some fine performances from this one too. A young Jerry Mathers plays the little boy, his mom is played by then 20 year-old Shirley MacLaine in her film debut, and Edmund Gwenn, John Forsyth, Mildred Natwick, and Royal Dano round out the key players and suspects. With the technical stuff, we get some good cinematography, and real nice visuals, some of which come off as really painterly and picturesque, which is fitting given that art plays a sizable role here. There's an enjoyable and playful score from Bernard Herrmann, and the overall mood and tone make this movie a real off-kilter treat. It's not the best, and I might be somewhat inflating my grade, but this film gets a lot right, and it is supremely enjoyable, so, if it's not too much *trouble*, try to give it a watch, okay?

Hitchcock's black comedy classic is a different direction for the master and he adapts well.

The Trouble with Harry Quotes